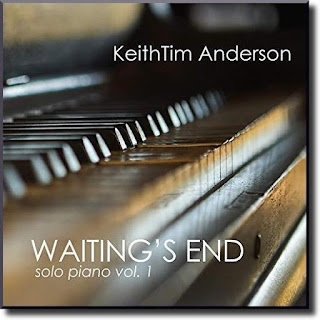 KeithTim Anderson is a Nashville-based pianist, composer and vocalist who grew up in a small town outside of Eau Claire, WI. Holding an Education Degree in vocal music with a minor in piano, Anderson has worked as a choral director as well as performed in churches, universities, coffeehouses and festivals. Titled Waiting’s End: solo piano vol. 1, his debut solo piano album marks an inspiring new path for this multi-talented artist who lost his voice for a period of time in 2017. Comprised of nine original compositions, Waiting’s End elegantly weaves contemporary, classical and hymnal motifs into fluid, moderately-paced arrangements, which are illustrated by particularly lovely melodic structures.

On a previous vocal album titled Refuge, Anderson created songs of scriptural and hymnal lyrics set to original compositions. On the all-instrumental Waiting’s End, he intuitively connects the theme of each song to a scripture relating to its title. For example, the beautiful opener “Autumn’s Rain” is a reference to Joel 2:23b. Beginning with twinkling piano notes that effectively convey a light rain in the breeze, this delicately flowing piece becomes more robust as keystrokes slide their way down to the middle and lower registers, before gradually climbing the scale again. Drawing its inspiration from Genesis 1:1, “Long Ago” almost feels like a prayerful lullaby, as it imparts a soul-sense of wonder with its drifting and soothing melody.

A musical reflection of Anderson’s personal faith, Waiting’s End is sure to gently uplift the spirits while bringing stillness to the mind. Peaceful, restful and softly inspirational, the album’s many moments of devotional ponder ultimately culminate in a comforting essence of grace, hope and acceptance. ~Candice Michelle