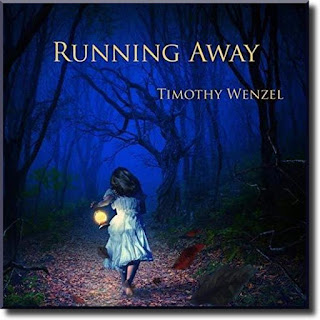 Timothy Wenzel is a composer and keyboardist with several albums to his name, the latest of which is titled Running Away. As with his previous release, What We Hold Dear, Wenzel has recruited outstanding violinist Josie Quick (one-half of the duo Perpetual Motion) who once again displays her impressive versatility on the strings. Jill Haley also joins the guest lineup this time around in which she lends her complimentary English Horn and oboe wizardry. Yet the most notable step forward Wenzel has taken with this album is in swapping out his past use of drum machines for live percussion by none other than Jeff Haynes; a move that's greatly enhanced his compositions with an overall warmer, more organic and velvety sound. This artistic progression has demonstrably taken Wenzel’s music to the next level, resulting in what is arguably his best work to date. Topping it all off is the co-production, mastering and mixing skills of Corin Nelsen and Running Away easily becomes a redefining moment for Wenzel’s creative expression.

Laced with many of Wenzel’s signature Celtic and renaissance elements, Running Away conveys a magical innocence and fairytale-like narrative, which is perhaps even more pronounced than with any of his prior works. Not only is this because Wenzel often infuses his central keyboard melodies with harpsichord-type motifs, but likewise, Quick’s and Haley’s respective violin and wind instruments are very much in-tuned to a Celtic musical spirit on this album. Furthermore, realistic sounds along the way of whimsical fairy flutes, elvish vocal tones and the occasional woodsy breeze all collectively enhance the experience of fey-like enchantment; it’s as if Wenzel and team all changed into Renaissance attire and leaped in a fairy ring to dance and play along.

Another thing I especially enjoy about Running Away is that it bears a similar essence to some of the more Celtic and renaissance-themed works of David Arkenstone and Medwyn Goodall. So if you’re a fan in particular of those artists I’d certainly recommend checking this out. Already one of my favorite contemporary instrumental albums of the year, Running Away is a fantastic musical direction for Timothy Wenzel that remains true to his familiar sound. I’m highly impressed with his selection of additional musician and production recruitments, which have further helped to bring-out his artistry and spotlight his talents even more! ~Candice Michelle

For more information please visit the artist's website. This album is also available at Amazon, iTunes and other retail and streaming platforms.