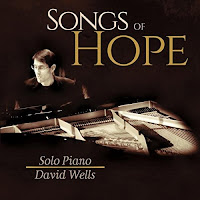 David Wells is a lifelong pianist and composer who has served as music director in various churches for over twenty-five years. Recorded on a seven-foot Yamaha Grand Piano, Songs of Hope is Wells’ debut album, featuring ten original solo piano compositions intended to lift the spirit and nurture the heart. Inspired early on by Windham Hill Records pianist George Winston, Wells’ own music is noticeably graced by Winston’s influence, as well as that of Jim Brickman, while likewise incorporating his personal jazz background into many of his arrangements.

“Selah” opens the album with a warmly flowing arrangement that smoothly rolls along like a scenic hillside in the sunshine. Producing a dimensionally radiant sound quality, it’s easy to envision the composer playing in a chapel as the music resonates throughout the hall. Three seasonal-themed pieces follow next, beginning with “Summer’s End”, a brightly optimistic number that mostly hovers in the higher registers. “Falling Leaves” slips into a more introspective mode, beginning softly at the top and trickling down into the mid-range with bolder exertion. My favorite composition on the album is “Winter’s Chill”, which particularly bears a resemblance to the mood and style of George Winston. Wells lends a steadily focused undercurrent with his left hand, as his right hand moves rapidly in a spinning motion, seemingly recalling that of watching someone hurrying down a winding staircase from above. I can only imagine what a treat it would be to witness this piece played live with its impressive display of intricate finger-work and evocative wintery atmosphere, which effectively conjures imagery of riding through a snowstorm. “Nocturne” is a notably intriguing composition full of expressive twists and turns. Despite its title, I’m more inclined to envision a sunny winter day while listening, especially amid the piece’s dynamically optimistic middle portion that’s decoratively bookended by a touching, heart-warming melody. “Traveling Light” effectively wraps up the album’s title and message with a tender yet spirited arrangement that imparts a sense of hope and optimism.

Soulfully elevating yet down-to-earth, the compositions on Songs of Hope generally remain in a happy place while simultaneously creating a space for inner reflection. Even amid the album’s more contemplative moments, Wells’ arrangements are inherently optimistic, open and personal, as well as immaculately arranged with an impeccable sound quality! ~Candice Michelle 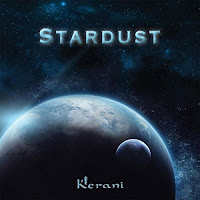 Kerani is a Belgian-born composer, keyboardist and producer who currently resides in The Netherlands. Inspired by the mysteries of the universe and wonders of our planet, her latest album, Stardust, transpires like a glorious symphonic journey of cosmic exploration. Comprised of ten compositions spanning sixty-five minutes, Stardust was recorded with a symphonic orchestra and mixed vocal ensemble, in addition to the amazing Kerani herself performing on both piano and a wide-range of synthesizers. Spanning the new age, neoclassical, contemporary instrumental and symphonic-electronic musical genres, Kerani’s style boasts strong parallels to that of the legendary Greek composer, Vangelis, of whom is one of her greatest musical influences.

“Stardust” opens the album with gossamer tones and melodically drifting piano followed by echoing drums emerging like a distant light approaching from a vast expanse. Gradually building into a cinematic arrangement of bells, horns and strings woven among synthesized layers, this imposing introduction effectively signals that of embarking on an epic cosmic journey. One of my favorite compositions on the album is “Rosetta”, which, in addition to being named after the satellite that took Philae (its lander module) to a comet, also shares its name with the title of Vangelis’ recent career-comeback album. The piece opens mysteriously with spacey, swirling textures that introduce more electronic elements along its path, revealing a majestically moving melody that conveys a soul-stirring wonder. Shooting star effects and celestial choral textures add extra layers of dimension that seemingly convey images of a satellite or spaceship traveling across the galaxy against a backdrop of stars. Another favorite is “Beyond”, a dreamily aerial piece that opens with an approaching drone. Slowly giving way to a gentle flute melody accompanied by sparkling timbres and angelic vocal tones, it glides softly along in a somewhat processional manner. “The Next Step” is a dynamically interactive composition named for astronaut Neil Armstrong’s famous words upon taking his first step on the moon. Led by a contemporary driving rhythm while incorporating electrifying rock elements, it seemingly alludes to a celebration of mankind’s spacefaring and technological accomplishments. “Gravity” is another highlight that conveys a somewhat ominous presence throughout. Beginning with stark, undulating percussion, the piece increasingly introduces choral layers and thundering drums as pristine synthesizers merge with lush orchestration. A beautifully majestic composition intended to convey the density and mass of celestial bodies, one can easily envision the gravitational pull and spinning orbits of planets. Concluding the album is “Stars (remix)”, a stellar composition of global celebration, led by Kerani’s fingers seemingly dancing across the keys to the backdrop of a lyrically hopeful and unifying chorus.

Transpiring like a fascinating space-adventure novel, Stardust draws many parallels to Kerani’s award-winning Arctic Sunrise album, although this latest installment in her impressive catalog is easily her most accomplished and luxuriously arranged. Cinematic, ethereal and regal, her music will appeal most particularly to fans of Vangelis (I recommend playing this album back-to-back with Vangelis’ Rosetta for an extended cosmic cinema!), as well as perhaps Constance Demby, Hans Zimmer and Yanni. I’m supremely grateful to see this gifted protégé follow in the footsteps of such a legend, and that in mastering this style of music herself, is helping to ensure its future place in our world! ~Candice Michelle

Album Review: Into the Mist by Fiona Joy 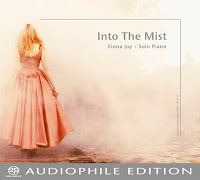 Fiona Joy is an award-winning, world-renowned pianist and composer from Australia who has additionally worked with other notable musicians. Among them includes Windham Hill Records founder, Will Ackerman, who produced several of her previous albums. Performed on an 1885 Steinway grand piano, her latest album Into the Mist was recorded and mixed in Direct Digital 256 (Quad DSD) in high resolution audio using the Extended Sound Environment (E.S.E.) proprietary. Comprised of ten elegantly prepossessing solo piano instrumentals that shift among phases of light and shadow, each composition is seemingly a dual expression of both human emotion and natural wonder.

“A Walk in the Park” introduces the album on a gently positive note, which seems to capture the song’s title both figuratively and literally. As with this piece and each one that follows, Fiona impressively demonstrates a keen ability for vividly illustrating the given names of her compositions with her piano-playing, simultaneously guiding the listener though a range of both inner emotions and outer landscapes. Following next is “Moon Over the Lotus Pond”, ebbing and flowing softly with carefully spaced pauses between each note, as the piece perfectly captures a nocturnal stillness and quietude. My favorite part of the album is the subsequent Opus trilogy that consists of three individual pieces, which although distinct from one another, all possess a billowing undercurrent like that of a winding river carving its way through a vast terrain. The first of these, “Opus: Into the Mist (Part 1)”, is both a somewhat darker and supremely beautiful piece that cascades abundantly up-and-down the keys with alternating accents on both lower and higher notes in the registers. Initially delicate and wistful-seeming, “Opus: Mist Rising (Part 2)” soon unfurls into an intently focused and penetrating number. Building gradually with a self-contained intensity like a stirring beneath the surface calm, Fiona’s intricate finger-work delivers boldly accented strokes against the edges of the composition’s interior. “Opus: Mist Before Dawn (Part 3)” effectively hints at an impending sunrise, while conveying a soothing sense of release along with the freedom of going with the flow. “Through Cloud” feels emotionally bittersweet; its mood seemingly paralleled by the image of gentle sunrays peering through a light rain shower. “Feeling Sunshine” exudes a golden warmth and air of carefreeness, flowing continuously from all sides like a fountain as the surrounding pool of water ripples on outwards. The slower-paced “Grey Sky Morning” ensues with a quieter mood of reflecting upon fond memories; its arrangement thinly spread-out among the registers with bolder emphases placed on the higher notes. “Galloping” is another favorite with a lovely companion music video. As with her song, “Invisible Train” (from her previous Signature-Solo album), in which Fiona effectively captured the forward motion of a train, she likewise accomplishes a similar effect here with the rhythmic mimicking of galloping horses. The minor-key “The Void” perfectly concludes the album with a sense of emotional intrigue, as if perhaps leaving one with a lingering impression of dreams, memories and secrets.

Easily Fiona Joy’s most accomplished album to date, Into the Mist is a stunning work of pristine elegance and sophisticated beauty expressed with sincerity and depth of the heart. While inherently of a romantic nature, these compositions effectively avoid any trappings of being overly sentimental, instead retaining a captivating essence of mystery throughout. Destined to become one of this year’s best solo instrumental recordings, Into the Mist is simply a must-have for those seeking piano music that’s both subtle and profound! ~Candice Michelle