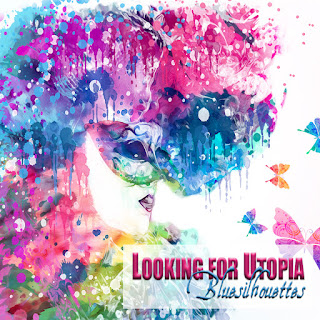 Bluesilhouttes is a musical project by composer, performer and multi-instrumentalist David R. Peoples. Self-described as a “stuffy academic”, Peoples freely expresses his creative side with his latest album entitled Looking for Utopia, which is themed around a quest for an idyllic place that the listener is invited along to search for. Joining him throughout is South African slide flutist Carina Bruwer and cellist Natasha Jaffe from Berlin, who each respectively contribute to the album’s overall balance of playfulness and solemnity. Comprised of twelve ensemble pieces that are electroacoustic in nature, Looking for Utopia could best be described as modern eclectic instrumental music with notable influences of jazz, classical and world.

“Valley of Hidden Treasures” introduces the album with a melodic exchange of flute, cello and piano until the piece's collective instruments build into an escalation of cinematic drumming towards the end. Immediately apparent from the onset is the seemingly improvised 'out-of-the-box' structure of this tune and others that follow. Next is “Peach Blossom Spring”, an interesting jazzy lounge composition with a downbeat groove and subtle imbuing of Indian psychedelia. A kaleidoscope of colors seemingly characterizes the equally intriguing “Dance of the Flickering Fire” in the form of whirling xylophone-like timbres and a cycling percussive pattern that feels somewhat circus-like. One of the most introspective pieces on the album is “Solitariety”, a solo piano number that passes through changing moods, as twinkling high notes offset more dramatic lower chords. Following next is the classical-tinged “Glass Flower City” with its graceful symbiosis of cello and piano that are joined at the bridge of the song by cinematic drums. Another notably intriguing piece is the curiously-named “Glass Butterflies” wherein a fanciful flute melody seemingly rides upon a constant stream of percussive bells. And lastly, my favorite piece on the album is perhaps “Take Me to Elysian Fields”, which makes for the perfect ending. Here an amalgamation of crystalline piano, swooshing effects and tribal-like tonal percussion seemingly suggest that a long dreamed-of and fantastical place is finally within the seeker's reach.

Delightfully whimsical and decisively unpredictable, Looking for Utopia could even be described as a kind of experimental lounge music. Consciously genre-defying, the music herein conveys more observation than emotion to my ears, while seemingly encouraging a daydream state within which the listener’s mind is free to wander, explore and discover! ~Candice Michelle

For more information please visit the artist's website. This album is also available at Amazon.