Spotlight: To the Moon and Back by Blackmore's Night 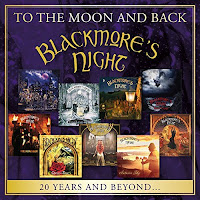 Blackmore’s Night is a British/American duo comprised of Ritchie Blackmore (founding member of the hard rock band Deep Purple) and his wife, Candice Night. Having recorded ten studio albums since 1997, To the Moon and Back compiles some of their finest work over the past 20 years onto a double album of 26 tracks, which totals nearly two hours of wonderful music. Described as a kind of renaissance folk-rock, the duo was initially inspired by artists such as Enya and Mike Oldfield, having founded Blackmore’s Night with a goal in mind of creating a type of fantasy-themed music that blended both ancient and modern elements. Rightfully heralded as one of the greatest guitar players of all time, Ritchie plays a variety of guitars (both acoustic and electric) as well as guitar-playing styles throughout. The album also incorporates classical strings, a chanter, hurdy-gurdy (a stringed folk instrument), keyboards and percussion – all topped-off by Candice’s lovely vocals, which possess a beautifully feminine tone that is gentle yet expressive. With compositions ranging from festive folk rock to enchanting ethereal ballads, subtle comparisons in both essence and style may be variably drawn to Loreena McKennitt, Mediaeval Baebes and Mike Oldfield.

Some of the album’s highlights include “Shadow of the Moon”, which opens disc one with a pristine arrangement of guitars, percussion and various instruments, as it moves at a moderate pace. Seemingly set inside the castle of an old East European town somewhere, Candice’s poetically lyrical melody effectively brings-to-mind that of an enchantress singing and dancing by the moonlight. Lively and whimsical, “Renaissance Faire” offers a fanciful escape, in which dancing couples dressed in traditional Renaissance garb enjoy outdoor festivities, food and drink. The fiery and focused “Spanish Nights” showcases passionate flamenco guitar paired with thundering percussion. Further complimenting its beautifully impressive and intricate guitar-work is Candice’s bewitching singing style, which pleasantly reminds me of Stevie Nicks. One of my favorite pieces on this set is “The Circle”, which seemingly evokes images of the ancient British Isles complete with ancient rituals, fire dances and robed druids at Stonehenge. Symphonic orchestration and a chorus of backing vocals lend to its theatrical sound, which are carried to the end by an enthralling electric guitar solo.

The second disc includes a cover of Mike Oldfield’s “Moonlight Shadow” in the style of a Celtic folk ballad and features a lovely flute interlude. Another favorite is “Somewhere Over the Sea”, a most enchanting number with a nocturnal, winter theme. Haloed by ethereal vocals throughout, the piece’s electric guitar part recalls that of Mike Oldfield’s Celtic-inspired Voyager album. Finally, “Durch den Wald zum Bach Haus” and “Nur eine Minute” are two lovely instrumentals in a classical renaissance style.

Although a fan myself, I have yet to see Blackmore’s Night perform live. However, they’re well-known for their fantastically engaging concerts which attract many attendees who, like the band, are often dressed in Renaissance garb. Having amassed quite an enthusiastic and loyal following, it’s no surprise why, as their alluring musical offerings beckon the listener to step back in time and enter a world that’s filled with romantic enchantment and imagination! ~Candice Michelle