Spotlight: From the Darker Seasons by Jeff Pearce 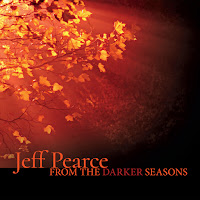 From the Darker Seasons continues in the signature ethereal-ambient, electric guitar style of music that Jeff Pearce triumphantly re-embraced in 2014 with his album With Evening Above, which was subsequently followed up by his 2016 album Follow the River the Home. The last album in this style that Jeff recorded before taking a hiatus for over a decade was his landmark 2002 release, Bleed, which preceded some lovely albums recorded on Chapman Stick followed by one piano album. As the album’s title and captivating artwork suggest, the eight compositions spanning nearly an hour that make up From the Darker Seasons was inspired by autumn and winter, which Jeff states are his favorite times of the year (and mine too!). As with his previous two ambient guitar recordings, as well as those of his from the 1990’s and early 2000’s (of which this album was similarly created in the image), From the Darker Seasons mostly exudes a nocturnal essence comprised of drifting ambient melodies and enveloping atmospheres, which possess melancholic underpinnings.

“A Walk Through the Leaves” opens the album with a haze of billowing chords comprised of a gentle melody set against a backdrop of encircling, layered guitar loops. As if drifting along in slow motion, the piece effectively illustrates that of autumnal scenery at dusk or dawn as changing leaves lightly flutter about in the cool breeze. This mood continues with “Sun on Frost”, which seemingly guides us into a deeper state of wistful contemplation. Slipping into a more spacey mode is “Constellations”, a beautifully magical composition defined by suspended layers of guitar notes that float and weave about like gossamer streams of color and starlight. Equally gorgeous, “The River in Late Autumn” bears some resemblance to both the title tracks from Jeff’s albums Follow the River Home and With Evening Above. Moving at a languid pace, its somewhat forlorn melody is softly sustained in the lower registers like that of a gently flowing river, as the sparsely-placed higher notes seemingly mimic that of moonlight reflecting upon the water. The ensuing “Downdrift” could be likened to a sequel of sorts to “Downstream” from Jeff’s previous release. Employing similarly processed effects, the piece seemingly embodies the very essence of a cold wind blowing, with its swirling sound patterns of icy metallic textures. “Midnight Snow” follows next with gurgling timbres and hazy distortion gently bouncing outwards, effectively bringing-to-mind that of trekking across a frozen landscape beneath the dim light of a shrouded moon. At 17:45 minutes, “A Long Winter’s Sleep” is a deeply atmospheric, ambient-space piece in the long-form style of Steve Roach, although still unmistakably Jeff. A beautifully dreamlike piece that evokes the darkest phase of winter, I’m able to imagine the mysterious aurora borealis shimmering above a vast northern landscape, as its tonal colors encircle and phase in-and-out of the listening space. Easily mistakable for synthesizers in its entirety, Jeff is simply unparalleled in his ability to craft such dimensionally-layered soundscapes using just electric guitar with processed effects. Concluding the album is “Cold Comfort”, a subtly melodic piece that conveys a sense of solitary serenity; its title aptly illustrating Jeff’s ability to create pieces that somehow feel paradoxically emotive and evasive.

Another impeccably gorgeous album from Jeff Pearce, it not only debuted in the top ten on Billboard’s New Age Chart soon after its release, but I was subsequently delighted to see Jeff perform live at The Gatherings Concert Series in Philadelphia, PA – a spectacular event produced and coordinated by Star’s End Radio host, Chuck Van Zyl. Perfectly capturing the enchanting beauty and mystery of the darker, colder months of the year, From the Darker Seasons is yet another ambient-guitar masterpiece full of haunting aesthetic emotion and wistful reflection! ~Candice Michelle

This review was originally published on Journeyscapes Radio on 10/12/17.