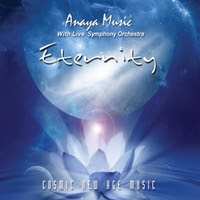 Brazilian-born composer and vocalist, Anaya, has previously recorded several albums of new age music. Having long dreamed of recording alongside a live symphony orchestra, her dream eventually came to fruition on her latest album, titled Eternity, where she is joined by the lovely arrangements of the Prague Live Symphony Orchestra. Comprised of seven compositions spanning nearly thirty-three minutes, all but two pieces (“For Love” and “Once in Time”) were co-composed and arranged with Steve Salani.

“Dharma” opens the album with a majestic orchestral arrangement of strings, woodwinds and brass instruments. Possessing a distinctively cinematic quality, the piece immediately brings to mind that of a fairytale movie. “New Skies” ensues with the sound of running water, perhaps from a stream or river, and is easily my favorite composition herein. Bearing subtle resemblances to the music of both Deuter and Kitaro, the piece is led by a stringed-instrument with a melody that possesses an East Asian flavor. Hazy piano droplets are interspersed among ethereal synthesized chords like balmy mists rising up from a spring, bringing images to mind of a beautifully serene Japanese garden. “Cosmos” follows next with a symphonic arrangement that unfolds in a procession-like manner, where it’s accompanied by the sound of a light snare, along with bells, chimes and tribal-esque percussion that builds towards the end. The next piece, “For Love”, is reminiscent of a romantic novel or period film, with its tenderly warm and sentimental quality. It is followed by the more fantasy-like “Love’s River”, which is introduced by a buoyant keyboard melody. A dreamily waltzing piece that dances and sways throughout, it mimics the motion of sailing along a river, while also bringing to mind that of watching a decades-old stage performance. Named for the living earth, “Gaia” follows with a blend of gently symphonic and environmental nature sounds that paint images of a paradisal landscape. Wrapping up the album is “Once in Time”, a sweepingly cinematic composition led by a full orchestra of string and brass instruments that eventually swell to a close.

While this album is based upon a theme of cosmic spirituality, it should be noted that the compositions herein are neither descriptive of meditation or space music. Rather, this is definitive new age neoclassical music that conveys images of epically visual and emotional scenes, as if musically narrating a movie. A simply delightful recording that will likely appeal to many fans of both new age and neoclassical music, Eternity is wrapped in the glowing essence of beauty, peace and positivity! ~Candice Michelle

This review was originally published on Journeyscapes Radio on 01/17/17.