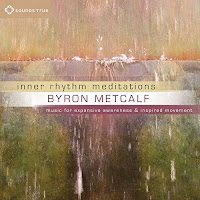 Byron Metcalf is a master world percussionist and shamanic practitioner whose musical career spans five decades. On this hour-long excursion, titled Inner Rhythm Meditations, Byron is additionally joined by the two outstanding talents of guitarist and synthesist Erik Wøllo (with whom Byron previously released an album in 2016, titled Earth Luminous) and world flutist Peter Phippen, who has likewise appeared on a number of other outstanding projects. Together this musically brilliant trio weaves a seductive veil of mystery and sacredness throughout the album’s six compositions, which variably incorporate electro-shamanic rhythms, bansuri and shakuhachi flutes, and ambient loops and guitar textures.

“Garden of the Peaceful Warrior” opens the album with warm, enveloping chords and deeply enthralling tribal drumming, as Peter weaves a subtle flute melody in often-suspended notes among the composition’s capaciously lush atmosphere. An earthy, sensual vibe exudes from this piece, as well as throughout the rest of the album, as it seemingly beckons the listener into a trance-like and profoundly tranquil state. The aptly-named “As Clouds Dance” follows next and is perhaps my favorite piece on the album. Here, Erik provides gently soaring and stratospheric elements that perfectly compliment Byron’s warmer and earthier instrumentation to create a soundscape which sounds equal parts organic and electronic. A supremely gorgeous composition that mesmerizingly morphs and progresses throughout, it brings to mind that of watching passing clouds changing shape across the sky, while one’s feet remain firmly planted on the ground to connect with the bare earth beneath them. “Patterns of Awareness” ensues with floating timbres, gently understated flute and deeply resonating percussion at the foreground, as one can hear Erik’s textural ambient guitars in the background. The everflowing and hypnotic synergy of these three key elements continues on the next two tracks, “A Perfect Place” and “The Awakened Heart”, both of which are as equally spellbinding. Closing out the album is the comparatively slower-paced “Presence of Longing”; led by a lulling drum-pulse it provides fifteen minutes of pure restorative bliss.

As a long-time fan of Byron Metcalf’s work, I’m continually impressed by his musical outputs, and Inner Rhythm Meditations represents the epitome of the tribal-ambient style of music that he so frequently visits. In fact, I’m reminded of an equally beautiful album that Byron released with Steve Roach and Mark Seeling in 2004 called Mantram, with its similarly warm, sensual sacredness and seemingly esoteric sense of mystery. Byron’s percussion is simultaneously ecstatic and energetic, yet meditative and peaceful, always producing a visually and soulfully transportative experience. A top-notch album for yoga, ritual and shamanic work, Inner Rhythm Meditations is another masterwork that I will be returning to quite often! ~Candice Michelle

For more information please visit the artist's website. This album can also be purchased at Amazon, iTunes and Bandcamp.