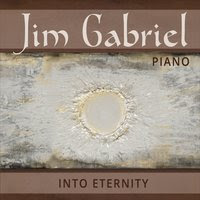 Into Eternity is the sophomore release from pianist and composer Jim Gabriel, and follow-up to his debut album, Sojourn. Comprised of twelve compositions recorded at Imaginary Road Studios in Vermont, Into Eternity was co-produced by guitarist Will Ackerman and multi-instrumentalist Tom Eaton. Both are also guest musicians on the album (with Will on acoustic guitar and Tom on electric guitar, bass and accordion), along with Jill Haley on English horn, Jeff Oster on flugelhorn, Gus Sebring on French horn, Eugene Friesen on cello, Charlie Bisharat on violin, Tony Levin on bass, and Noah Wilding on vocals.

“From the Rising of the Sun” opens with gently tip-toeing notes in the higher register, eventually blossoming into a vibrant and colorful melody. A gently uplifting introduction, this piece is one of a handful of the album’s solo piano compositions, of which are interspersed among other elegant ensemble pieces. “Winter” is an especially beautiful piece that bears a similar feel to some of George Winston’s works and other classic Windham Hill recordings. Beginning with trickling piano droplets in the higher register, accompanying cello and French horn lend a touch of nostalgia to the composition, which is led by a flowing piano melody that seemingly captures the essence of hurrying through the snow in a winter wonderland, or possibly even a figure-skating couple dancing in an icefield. I’m also especially fond of the title track, “Into Eternity”, a notably atmospheric and contemplative number that features drifty piano chords enshrouded by ambient guitar textures. “First Light” is another particular highlight in which pulsating piano notes in the lower register underlay the composition’s main melody, perhaps mimicking that of an approaching beacon of light. Further complimented by ethereal wordless vocals and suspended flugelhorn notes, the piece brings to mind that of a ship at sea sailing towards a lighthouse in the distance. The likewise especially noteworthy, “Midnight”, is a Coldplay cover that feels appropriately nocturnal and introspective, which Jim has beautifully rendered on solo piano. By contrast, “Americana” is one of the album’s brightest and boldest compositions featuring English horn and cello. Possessing a certain hymnal quality, this piece feels both patriotic and inspirational, as it seemingly paints an image of an old chapel in the countryside. The ninth track, “Goodbye for Now”, lends a wonderful seasonal contrast to the comparatively snowy, “Winter”, with its air of warmth and leisure that’s further enhanced by acoustic guitar and accordion.

Overall reflective with a gentle dynamism, Into Eternity seemingly shifts through the moods and tonalities of both day and night, as well as captures essences and landscapes of various seasons. Each contributing artist lends a delicate touch of added dimension to the listening space, as Jim Gabriel’s often flowing and always elegant piano melodies remain the focal-point of these lovely compositions! ~Candice Michelle