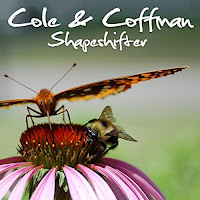 Shapeshifter is the collaborative release by Scott Cole and Matthew Coffman, who create an intriguing blend of music that ranges from experimental ambient to acoustic, avant-garde and instrumental world fusion. Comprised of thirteen compositions, the album features an eclectic variety of instruments played by the duo, which include mountain dulcimers, bass, electric and acoustic guitar, synthesizer, keyboard, sitar, flute, reed instruments, didgeridoo, ukulele, cajon, melodica, guitarron, resonator, udu, and other percussion.

“Arc” opens the album with oscillating pulses, immediately reminding me of Steve Reich’s seminal Music for 18 Musicians recording. Sitar, percussion and bass guitar soon join the ensemble to form a minimally melodic and experimental world fusion soundscape that’s not too unlike the ‘fourth world’ music of Jon Hassell. “Strength Will Come” ensues with nocturnal calls and droning, earthy sounds. One of the most intriguing pieces on the album, it progresses into a rhythmic pattern of spinning strings and atmospheric textures, seemingly flowing organically along an improvisational and unpredictable path. Following next is “Emerging”, a more discernably melodic piece that begins with the peaceful sound of ocean waves and gentle acoustic guitar, which are soon accompanied by reed instruments and percussion. The duo also lends an interesting twist to the popularly rendered song, “Scarborough Fair”, which opens with dreamy synthesizers and prominent bass guitar. Flute and reed instruments provide the lead melody among oscillating effects and a pulsating rhythm, curiously bringing to mind that of sailing away at sea while simply allowing the currents to guide their own course. Supported by guitar, synthesizer and subtle percussion, “Calm H2O” is another highlight characterized by lovely liquid bell tones, which not only perfectly conveys the water element, but also reminds me a bit of Balinese music. Closing out the album is “View of the Valley”, an upbeat tune with a rumbling-type rhythm that features didgeridoo and electric guitar. A likewise particularly intriguing piece, it seemingly blends indigenous Australian and Irish music with hints of psychedelic rock.

Fusing contemporary and world instrumental music throughout, Shapeshifter possesses a certain bohemian essence; one that seems to paint visual collages of nature and its cycles, the ebb and flow of the tides, and blossoming and dying of flowers. Characteristically minimal and seemingly improvisational in its approach, Shapeshifter is a genre-defying album that is worth checking out, especially, for fans of Steve Reich, Jon Hassell and Al Gromer Khan! ~Candice Michelle

This album can be purchased at Amazon, iTunes and Bandcamp.