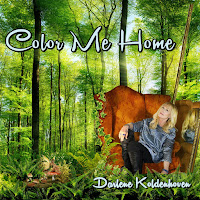 Darlene Koldenhoven is a Grammy award-winning vocalist with an impressive resume that includes her role as the soprano soloist in the Yanni Live at the Acropolis performance, as well as having appeared in the movie Sister Act portraying a choir nun. Her ninth album, Color Me Home, is an exquisite eleven-track excursion which Darlene produced, engineered and composed the lyrics and music for, as well as sings, plays piano, synthesizer, native drums and shakers on. Beautifully and thoughtfully packaged, the CD includes a coloring book depicting images of nature, perfectly illustrating a spectacular collage of diverse arrangements and instruments. In what could perhaps be best described as a fusion of classical crossover, contemporary instrumental and new age vocal music with an often-touch of subtle world elements, the album’s track lineup alternates between sung lyrical compositions and instrumental pieces that feature wordless vocal intonations. Joining Darlene on this musical adventure is a team of talented artists, of which includes Tom Scott, Brent Fischer, Ricky Kej, Wouter Kellerman, Charlie Bisharat, David Arkenstone, Rocky Dawuni, Gayle Levant, Jeff Oster, Al Jewer, John Sarantos, Mike Miller, Lyn Bertles, Nick Vincent, Courtney Jacob, and Vanil Veigas.

“First Light” opens the album with the rolling, soothing sounds of ocean waves coupled with singing birds, before soon introducing a lovely ensemble comprised of piano, keyboard, oboe, flute, piccolo and violin. Further enhanced by its radiant wordless vocals, the composition seemingly paints an image of golden sunrays pouring through the trees of a lush forest, in what feels like a magical storybook having come to life. “The Pleasure of the Mourning Dove” follows next, a piece that aptly begins with the cooing of a dove. Here Darlene offers up a lyrical melody, her soprano voice perfectly complementing the song’s elegant arrangement of piano, violin and viola. “Kalahari Calls” is easily one of my favorite compositions herein; its African safari flavor and leisurely chill vibe conveying a sunny, tropical terrain filled with luxuriant jungles and rainforests. A mesmerizing ensemble of flute, piano and tribal percussion is further accentuated by airy wordless vocals that seem to whirl about its beautifully exotic landscape. The sound of wading through water introduces “Song of the Swans”, another lyrical song that possesses a somewhat mythical feel. Darlene’s soaring soprano vocals in tandem with the classical touches of clarinet and harp seem almost cinematic, as if a narrative has unfolded about a fairytale princess or sleeping beauty who has found herself in an enchanted land. Characterized by native flute and drumming, “Indian Summer” is another one of my favorite pieces on the album. Here I’m reminded of a glorious sunset softly illuminating a vast canyon. This image is further crystalized by sparking piano and swirling chimes, along with both siren and tribal-esque voices that seem to soar above the terrain. Equally captivating is “Ode to Our Orb”, another piece accentuated by Darlene’s soaring wordless vocals, as well as features the additionally amazing talents of David Arkenstone on guitar, along with Ricky Kej and Vanil Viegas on keyboards and rhythm. The composition’s earthily sensual and shimmering soundscape combines elements of ambient, world and contemporary instrumental music, and feels as blissfully rejuvenating as that of standing beneath a waterfall in a paradise lagoon.

Imbued with a brilliant radiance and richness throughout, listening to Color Me Home is akin to observing light hitting a giant crystal prism that emanates all colors of the rainbow. Immaculately produced, the album’s sound quality is superb and the guest performances outstanding, overall culminating in a soulfully rewarding experience that’s filled with joy, serenity and global adventure! ~Candice Michelle

For more information please visit the artist's website. This album is also available on Amazon and iTunes.

This review was originally published on Journeyscapes Radio on 02/23/17.