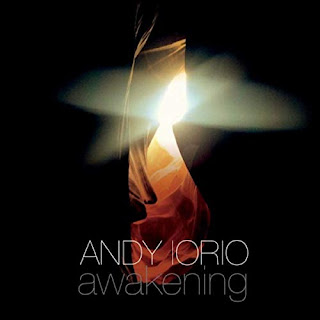 Awakening is the third studio album by New York based neoclassical pianist and composer Andy Iorio. Featuring ten one-word titled compositions, Awakening features elegantly cinematic piano and string arrangements along with some solo piano pieces. Sometimes sweepingly powerful and at other times solemnly reflective, the album exudes both passion and purpose, as it relates a personal story of love, loss, release and redemption.

Conceived as a thematic narrative from beginning to end, the album opens with “Ascend”, a somewhat forlorn piece that features a swell of strings as it proceeds in a gradual upwards climb. “Reflection” follows next, which is one of three solo piano pieces along with “Faded” and “Reverie”. Gracefully flowing at a moderate pace, these tender solo instrumentals offer more reticently peaceful moments.

The orchestrated pieces tend to possess rising-and-falling motifs, which include highlights such as the title piece, “Awakening”, as well as “Adrift” and “Arise”. These wonderful pieces showcase blossoming arrangements that consists of commanding piano leads accentuated by strings.

Paired towards the end of the album are two compositions of rather contrasting moods. The first of these is “Release”, which exudes an air of hopeful optimism without seeming overly buoyant. “Bittersweet” ensues with sustained strings and a cycling piano figure, potentially making this the album’s most enchantingly wistful moment. Aptly conveying images of cloudy skies, it seemingly eludes to that of reminiscing upon the past, perhaps in the form of sifting through old photos and recalling long-tucked away memories.

Seemingly looking towards the sunrise while embracing a new perspective is the final piece, “Solace”, which concludes with a gently galloping piano melody in tandem with delicate strings.

Thematic and narrative though not overly bombastic, Awakening is easily Andy Iorio’s best work to date. It will particularly appeal to those who enjoy expressive instrumental music that draws from both classical and contemporary modes! ~Candice Michelle

For more information please visit the artist's website. This album is also available at Amazon, Bandcamp, and other retail and streaming platforms.