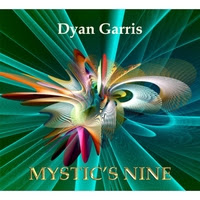 Mystic’s Nine is the thirteenth album from Dyan Garris, an Arizona-based composer whom is also described as a “visionary mystic, voice recognition psychic, and trance channel medium who reads from the Akashic Records”. A classically-trained pianist and violinist who began playing at the age of four, her impressive repertoire of both artistic and healing tools consists of meditative music, as well as spiritual books and oracle decks. Named for the esoterically significant number nine, Mystic's Nine is comprised of eleven compositions spanning forty-three minutes that features both relaxing and rhythmic passages. The album mainly consists of piano and synthesizers throughout, as Dyan is joined by several guest artists on varying tracks, including Joe Bauer on drums, Scott Schaefer on flute, Amber Norgaard and Margo Joy on vocals, Jeff Oster on flugelhorn and trumpet, Will Clipman on percussion, Michael C. Ronstadt on cello, and Peter Sterling on harp.

“Mystic’s 9” opens with an uplifting arrangement of piano and synthesizers accompanied by a steady drumbeat courtesy of Joe Bauer, who also plays percussion on two other tracks. Eliciting a warmly positive mood that feels a bit whimsical, the piece affectively brings to mind that of flying a kite in the winds of a sunny day. “Mystic Sea” follows next, a particularly beautiful piece that features Scott Schaefer on flute. Beginning with bubbling currents, gentle flute is woven among a swirling sea of celestial chords, which are accompanied by distant ethereal voices evocative of mythical mermaids and sirens. Easily my favorite piece on the album, I’m reminded somewhat of both Chris Conway and Aeoliah, as it conveys the healing spirit of the ocean and paints stunning images of a peaceful underwater world. Up next is “Muse’s Gift”, one of two lyrical vocal tracks on the album, featuring singer Amber Norgaard and harpist Peter Sterling. Here, Amber delivers an inspirational message about leaving one’s worries behind, as Dyan’s piano accompanies the song’s lead melody throughout. Another favorite, “Mystical”, ensues with the immediately recognizable flugelhorn and trumpet contributions of Jeff Oster, which mesmerizingly soar above a steadily rhythmic current that’s underlined by a pronounced bassline. Conveying a euphoric feeling of travel and flight, it’s easy to imagine a hang-glider soaring above a pristine landscape in the sunset. I’m also particularly fond on the next track, “Mystic Kiss”, which features Will Clipman on percussion. A sparkling, aquatic-like piece in which crystalline bells and synthesized vocals form a gentle melody, it imparts the essence of both romantic as well as universal love. The ninth track, “East on 9th”, is also a notable highlight, once again featuring Joe Bauer on drums. Led by my favorite piano melody on the album, the piece bears a hint of exoticism that conveys an almost gypsy-like feel infused with subtle elements of chill. Closing out the album is “Water for the Soul”, a gently bright yet calming piece led by piano, synthesizer and delicate vocal washes.

Definitive of melodic new age music with influences of both 80’s and 90’s-era works in the genre, there is just enough musical variety on here to keep things interesting. An angelic essence infused with a genuine spirit of love and joy radiates throughout this album, one that is sure to leave the listener with a feeling of both deep peace and solace! ~Candice Michelle

This review was originally published on Journeyscapes Radio on 01/28/17.