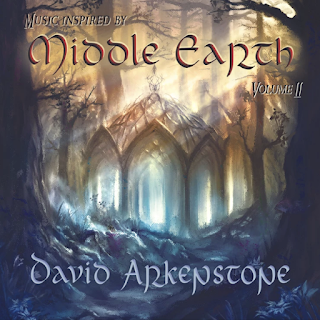 I have long been fascinated by the life of J.R.R. Tolkien and his best-selling classic epic fantasy novel series The Lord of the Rings. If there is one composer who can most perfectly pay musical homage to the enduring legacy of Tolkien’s greatest works, it’s the creatively prolific David Arkenstone. A musical novelist in his own right, as well as multi-Grammy Award nominated recording artist and Billboard New Age chart-topper whose career spans more than three decades, Arkenstone is certainly no stranger to the fantasy genre. Having mastered a diversity of musical styles – including Ambient/Chill, Celtic, World and Classical Crossover/Pop – Arkenstone frequently draws creative inspiration from ancient folklore, mythology and natural places of wonder across the globe.

Atmospheric symphony and haunting choral figures open “The Shadow of the Past” wherein the veil between our world and the enchanting one depicted in the novels is once again lifted for a time. “The Green Dragon” follows with a festive arrangement of Celtic rhythms and violin (courtesy of Luanne Homzy) as one might imagine themselves joining the lovely hobbits for some dancing, drinking and playfulness among the green hills and pastures. Subsequently, Jillian Aversa provides ethereal wordless vocals on the mesmerizing “Daughter of the River”, a delicate and flowing piece that feels like sailing down a sparkling river in a paradisiacal elven forest.

Other outstanding pieces like “Servant of The Secret Fire” and “Minas Morgul” make use of darkly dramatic orchestration, shadowy gothic choirs and thunderously cinematic drumming, recalling the darker neoclassical mood of Arkenstone’s 2016 album Beneath a Darkening Sky.

Two other notable favorites include the back-to-back compositions “Caras Galadhon” and “Fangorn Forest”. On the watery and crystal-like “Caras Galadhon”, gently whirling minor-key orchestration conveys a bewitching suspense that feels reminiscent of "Lothlórien" or “The Palantír” from the first Music Inspired by Middle Earth album. In gentle contrast, “Fangorn Forest” recalls some of Arkenstone’s more world-tinged albums (plus the classical symphonic touch) with its native flute, rhythmic shakers and clicking percussion.

For those who enjoyed the accompanying film scores by Howard Shore to Peter Jackson’s cinematographically gorgeous and otherworldly movie adaption of The Lord of the Rings trilogy, David Arkenstone’s Music Inspired by Middle Earth Vol. II is an absolute must-have for any L.O.T.R. novel, movie, music or memorabilia fan. Variably moving along its course from dramatic to dreamy, and suspenseful to serene, Music Inspired by Middle Earth Vol. II is another poetically magnificent musical journey that could be described as ‘atmospheric classical fantasy music’ – and sure to be a top contender in the genre for this year’s best album.