Album Review: Into the Unknown by Joseph L Young 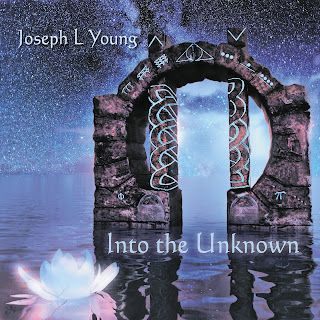 Composer and multi-instrumentalist, Joseph L Young has enjoyed a proliferous career as a musician unafraid to go beyond boundaries of genre, style, or sound. Joseph is an established chart-topping, award-winning musician whose music has enjoyed broad radio and internet airplay, spanning such genres as New Age, Ambient, Relaxation/Meditation, Native Fusion, Jazz Fusion, and Contemporary Instrumental. But not to be limited, he has also played with a variety of bands ranging from rock, blues, folk, jazz and even Celtic.

In his sixth full-length album, Into the Unknown, Young delves deeper into musical expanses, with compositions that explore the mystical dimensions of time, space, psyche, and spirit, normally related to the unexplained, mysterious, or concealed. The album features three songs previously released as singles: “Secrets of Stone” released in 2021, “Remembrance of Time” in 2020 featuring pianist Lynn Tredeau, and a remix of his 2019 single “Between Worlds.”

The album also showcases more of his talent as a composer and arranger as well as his mastery of the flute. “Every note I play comes from my heart and is how I share my love of music with others, it's how I express my passion for the flute”, explains Joseph. He interlaces ancient sounds with modern synth arrangements which prevail in world fusion authenticity.

Joseph holds a second degree black-belt in Chinese Shao-Lin Kung Fu and Tai Chi which evidently contribute to his unique approach to music. “I want my music to take listeners on a journey of discovery”, he expounds, “to help them work through their emotions, releasing the negative, as they grow and change, and serving as a catalyst to help with their transformation."

The title track “Into the Unknown” is my favorite piece as it abounds with mystique and features a myriad of exotic instruments, voices, and rhythms bathed in a Middle Eastern style melody. In tracks like “Remembrance of Time”, “Enchanted”, “Secrets of Stone”, “Eclipsed”, and “Windswayed”, the alluring flute and creative musical arrangements transport the listener to ancient times, distant lands, sacred ceremonies, and mysterious places.

On other tracks like “Beyond the Horizon”, “Between Worlds”, “Transcendence”, “The Forgotten”, and “Ancestral Crossings”, Joseph seems to venture into other spheres such as space exploration, and perhaps even the afterlife. Into the Unknown is a treasure chest of musical jewels you’ll delight in listening time and time again. The unknown calls us to live consciously. Joseph composes music that speaks to the human soul, and which infuses the silence with the sounds of life.

For more information please visit the artist's website. Into the Unknown is also available at Bandcamp, Amazon, and Apple Music.