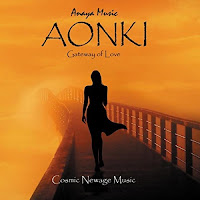 Anaya is a Brazilian composer, keyboardist and vocalist who creates music devoted to elevating the human spirit. Her previous album, Eternity, was recorded with the Prague Symphony Orchestra, with her latest album, Aonki: Gateway of Love, mostly continuing along a similar path. Featuring musicians such as Fabianne Gotelipe on violin, Daniel Marques on viola and Priscila Jota on cello, the compositions are essentially characterized by gently sweeping ensembles of classical stringed instruments with keyboard textures woven throughout.

“Laman Song” opens somewhat dramatically with an orchestral motif that quickly comes to a swell. Immediately bringing-to-mind that of a ship sailing upon stormy seas, the listener is eventually seemingly led out of its path into calmer waters, as the rest of the composition playfully carries on for a bit with its rather peculiar melody of symphony and synthesizer. “Breath” follows next and is easily one of the loveliest pieces on the album. Characterized by celestial tones and subtly flickering textures that convey lots of illumination, the piece is led by a tender cello melody as it seemingly drifts along airily like a feather in the wind.

“Because of You” is another highlight that opens with a chorus of classical strings. Featuring a somewhat improvisational arrangement, Bernardo Bittencourt lends a touch of Baroque with a European lute instrument. The subsequent compositions “Aonki Mov I” and “Aonki Mov II” both reside almost squarely within neoclassical territory, with the latter piece featuring the accompaniment of The Brazilian Symphony Orchestra. Also notable is “Extase II”, which is briefly introduced by sounds of rushing water, as synthesized pan-pipes and celestial tones convey an innocent, magical quality that effectively brings-to-mind idyllic images of peaceful gardens and rivers.

“A Path to the Infinite” offers a caressingly warm conclusion to the album with an arrangement that sounds almost entirely comprised of stringed instruments, as the piece dances lightly about in a rather carefree manner that eventually ends on a radiant note.

One observation particularly worth noting about this album is that its melodies tend to be characterized by a superficially wandering nature, as opposed to being more descriptive of profoundly moving or memorable suites. Essentially, Aonki: Gateway of Love mostly relies on the strength of beautiful-sounding instruments that best-fittingly serve as conceptual aural collages – and will likely be most-appreciated among listeners within that defining capacity. ~Candice Michelle

For more information please visit the artist's website. This album is also available at Amazon, iTunes and Google Play.
at March 09, 2018