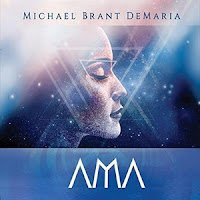 Composer and multi-instrumentalist Michael Brant DeMaria returns with his latest album, Ama, following a five-year hiatus since his last solo recording entitled The Maiden of Stonehenge. Known for his musical versatility which includes his mastery of world flutes, ethnic percussion and textural electronic arrangements, DeMaria essentially creates electro-organic, ethno-ambient soundscapes within a consciously new age musical framework. Heartwarmingly dedicated to his recently deceased mother, the album is comprised of ten compositions spanning approximately fifty-seven minutes. Likewise, the word “ama” not only means “mother” or “grandmother” in many languages, but also translates as “water” in Cherokee tongue of which aptly makes for an intriguing parallel.

The opening title track, “Ama”, slowly unfolds with sparsely-placed, high-register piano notes that eventually introduce an improvisational arrangement of fluttering flute and breathy intonations amid a fog of soft synthesizer tones. Slipping even deeper into this mysterious mood is “Night Voyage”, which ensues with an ambient-electronic arrangement of shifting synthesizer tones and shimmery metallic percussion that resonates all around. This is one of my favorite pieces on the album – with its deeply nocturnal and dreamily shamanic qualities effectively evoking images of a desert canyon under starry skies. The following “Stella Maris” is one among a few atmospherically lighter pieces on the album, which are characterized by softly layered angelic tones that bear some resemblance to the music of Deuter or Liquid Mind. The next piece, “Lost”, is comparatively earthier with its rewardingly simple combination of lower vibrating flute and gentle acoustic guitar.

Another one of my favorite pieces on the album is “Between the Worlds”, which as its title suggests, likewise exudes a mysteriously transportive, shamanic essence. Here, native flute seemingly echoes upon the winds amid a shimmery droning haze that permeates the listening space. Another particularly intriguing piece is “Renascence”, which features crystalline piano droplets falling upon a bed of billowing ambience. The closing piece, “Arrival”, seemingly guides the listener to an idyllic destination with its celestial tones of light and warmth.

Showcasing lots of subtle variety, the compositions on Ama are overall mysteriously ethereal and hail a most wonderful musical comeback for Michael Brant DeMaria. Additionally, DeMaria’s parallel work as an integrative psychologist and yoga instructor yields profound influence on the soundscapes he creates, of which are deeply serene, gently hypnotic and seemingly esoteric in nature. Effectively bridging the stylistic borders of ambient and new age music, this beautiful work will highly appeal to many listeners who enjoy both genres! ~Candice Michelle

For more information please visit the artist's website. This album is also available at Amazon, iTunes, CD Baby and Google Play.
at March 08, 2018