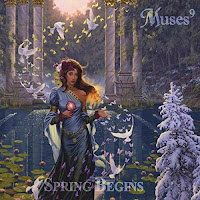 Spring Begins is the follow-up release to Fynrien’s Dream, the debut album by Muses9. Having long admired the mythic naturalistic paintings of Jonathon Earl Bowser, I immediately recognized the cover artwork which further peaked my interest as to what the music herein might sound like. Although information about the artist is limited on their website, album credits include lyrics by Algernon Charles Swinnburne, music by Igor Pogosyan, music production with Bryon Shakespeare, and drums and percussion by Koorosh Daryaie. All nine compositions feature female vocals, which are presumably provided by the same vocalist throughout, albeit given additionally layered and harmonized effects in parts. Somewhat eclectic and avant-garde in nature, the musical style is rather difficult to describe, although perhaps it could be loosely described as synth-pop with overtones of dance/electronica and ethereal/darkwave.

The album opens with “Angel”, which is probably my favorite track in the line-up. Introduced by some gypsy guitar licks and bubbly synth pads, an electronic/techno rhythm soon kicks in accompanied by lyrical vocals that are seemingly placed in the background. There’s an intriguingly ‘underground’ atmosphere of burlesque or cabaret imbued in these compositions, of which it’s easy to imagine that of being in some cozy, dimly-lit, hole-in-the-wall bar or lounge on some Broadway strip. The rest of the album mostly adheres to a similar feel and style while often employing subtle tribal percussion throughout, peaking once again about midway through with the bouncy, playful and somewhat risqué-seeming, “Cat and Mouse”. I especially like the opening renaissance flair that revisits the song along the way; it fittingly compliments the witchy tone of the vocals, as the lyrically sung incantations are given an echoing left-right speaker effect. “Prelude” is another highlight and mostly instrumental, save for the breezy vocal-and-piano bridge that comes in around the halfway mark. A lighter, softer piece compared to most of the album, hovering strings, strumming guitar and processed bell-tones all collectively create a hazy semblance of enchantment. The closing title piece, “Spring Begins”, is mostly acapella, with the vocalist uttering ghostly intonations that effectively convey a somewhat “dark fey” vibe.

While I especially enjoyed the conceptual feel of this album, and specifically, its somewhat unconventional edginess, I felt that a few things could be improved upon on future releases in terms of production and sound quality. Additionally, while the singer’s voice is quite fitting for this style of music, her vocals mostly sounded like they were coming from another room. Nevertheless, I believe these are things which can be easily improved upon, as there’s certainly much potential here for this artist to advance their unique sound to the next level! ~Candice Michelle

This review was originally published on Journeyscapes Radio on 12/07/17.