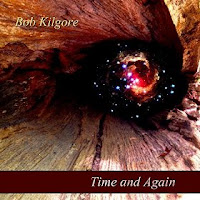 Time and Again is acoustic guitarist Bob Kilgore’s fifth album, joined throughout by his brother Bear on keyboards and percussion, and Sarah Dean on cello. As the inventor of a device called the harmonic capo, Bob kept his invention to himself for many years until he introduced it to the world in 2007. Combining elements of world, jazz, classical, solo acoustic and contemporary instrumental, Bob has crafted a dynamic and edgy, yet sophisticated album, full of intricate detail and vivid, colorful tones. There is a nocturnal quality to most of the pieces, with lots of minor chords and a frequent exotic flare.

“IDIBITS” opens the album with cascading guitar and synthesizers in a somewhat pensive mood. It is followed by the gently romantic, “Time and Again,” which features an acoustic trio of guitar, piano and cello that beautifully interact and complement one another. “Meeting of Waters”, which is probably my favorite track on the album, has a strong world fusion element. Inspired by the confluence of the Amazon River and Rio Negro in Brazil, one feels like they’ve embarked on an adventurous night sojourn, as they’re led by the sounds of percussion, piano and a gypsy-like guitar melody. Another favorite is “Caravan Jam”, a slightly dark and mysterious piece that features a ‘been’ or “snake charmer” instrument, hazy synthesizer sounds and sensual, middle-eastern percussion. “Stone Lions” is among the album’s more energetic, fast-paced tunes, and perfectly illustrates Bob’s highly impressive guitar playing skills. In fact, it’s almost hard to believe there are no guitar overdubs here! Likewise, Bob’s unique and interesting use of his harmonic capo is showcased on tracks like “Approaching Joy”, which is a fingerstyle, solo acoustic number; “Stop Motion”, a tapping tune that is accompanied by keyboards and synthesizers; and the closing “The Tortoise and Achilles”, which segues into a reprise of the opening track, before gently winding down.

Time and Again is an absolutely fantastic recording as well as one of the most enjoyable acoustic guitar centric albums I’ve heard in a long time. Bob has masterfully weaved many musical styles together, while touching on several cultures and geographical influences. “Time and Again” is enthusiastically recommended to those who enjoy both stellar guitar-playing and innovative, multi-genre music. ~Candice Michelle

This album can be purchased at Amazon and iTunes.