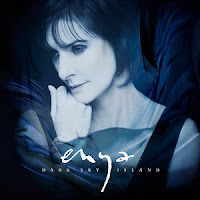 Following a seven year hiatus since her 2008 album, And Winter Came, Enya returns with the long-waited, Dark Sky Island, which is named after the island of Sark in the English channel where the absence of light pollution allows for naked-eye astronomy. As if to pick up where she left off twenty years prior, I can honestly say this is easily the best album the beloved Irish singer has put forth since The Memory of Trees. In fact, it’s a rather stunning return to the formulaic sounds and concepts of her most seminal works, Watermark and Shepherd Moons, yet it’s also freshly modern and musically evolved. The many shades of mystique are back, conveying a perfect balance of light and shadow, as are the lush orchestrations, enveloping, cathedral-like atmospheres, and Enya’s ever-captivating multi-layered vocals, each having been recorded separately and then stacked upon another to mimic a choir of hundreds.

Powerful, energetic songs with marching rhythms and soaring choirs like those on the “The Humming” and “Even in the Shadows”, contrast with more tender, melancholy pieces like “I Could Never Say Goodbye” and “Dark Sky Island”. Themes of lost love often revisit the album, conveyed by poetically beautiful lyrics that are wrapped in enchantment and innocent wonder. Favorite songs include “So I Could Find My Way Home,” a piece dedicated to producer Nicky Ryan’s late mother. Reverent and hymn-like, this deeply touching song could tug at the heartstrings of even the least sentimental listener. The more buoyant and sparkly, “Sancta Maria”, is another particular favorite that is led by a harpsichord and heavenly choir. Also equally notable is the distinctly Celtic-flavored “The Loxian Gates", which Enya sings in Loxian - an elvish-like language and alphabet created by lyricist Roma Ryan. Majestic and magical sounding, it brings to mind images of scenic Ireland, its pastoral lands and ancient castles. “Pale Grass Blue” is one of three bonus tracks included on the deluxe version of the album and makes getting this edition worth it alone. A moderately-paced tune that is highly reminiscent of Enya’s classic hit, “Caribbean Blue”, it features one of the most lovely, haunting melodies on the album, which seems to convey the passing of time, changing seasons and colorful leaves dancing in the wind.

There is simply little doubt that Enya is the gold standard when it comes to ethereal perfection, and although I felt her later efforts overall lacked the magic of her earlier works, I am pleased to say that Dark Sky Island is undoubtedly classic Enya in every sense. While immersed in these spellbinding compositions, I was reminded at every twist and turn why I originally fell in love with her music once upon a time. ~Candice Michelle

This review was originally published on Journeyscapes Radio on 03/08/16.