Album Review: Held in the Light by Dan Chadburn 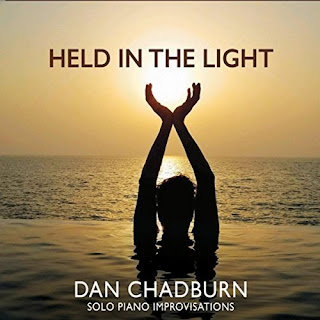 Held in the Light (subtitled Solo Piano Improvisations) is the seventh solo piano album by pianist and composer, Dan Chadburn, which was recorded at Piano Haven Studios in Sedona, Arizona. A native of Oregon, Dan began studying piano at the age of nine and later earned a Bachelor of Music in Piano Performance degree at Pacific Lutheran University. Later residing in London for a time to study electroacoustic composition, he has since become well-versed in both classical and modern musical traditions. Dedicated to his father and mother, Held in the Light features thirteen inspirational instrumentals, of which includes ten improvised solo piano renditions of his parents’ favorite traditional hymns and three original improvisations of his own.

Aptly introducing the album is “Breathe on Me, Breath of God”, an English Christian hymn dating to the late 1800’s, which was written by a Church of England vicar by the name of Edwin Hatch. A caressingly warm and radiant composition with a fitting song title to match, its melody seemingly conveys the essence of waking up to the blessings of a beautiful new day. Many listeners will instantly recognize the opening notes of “Be Thou My Vision”, which is a traditional hymn from Ireland. One of my favorite renditions herein, this gently lilting composition is frequently sung in both Old Irish and its later English translation. Also included is the famously beloved, “Amazing Grace”, one of the most popularly rendered hymnal classics of all time. Lending a beautifully improvisational twist to this song, Dan plays the main melody in the middle registers before subtly shifting into the higher registers and back again throughout. Although an instrumental rendition, I could easily imagine the song’s comforting lyrics singing along in my mind while listening. Dan also puts a lovely spin on “Wondrous Love” (otherwise known as “What Wonderful Love Is This”), which is a widely-known Christian folk hymn with a melody derived from a popular English ballad. Among my favorite compositions on the album is one of three originals called “Breath of Life”, for which Dan also made an accompanying video of him playing the piece. Outwardly contemplative while emitting a subtle sparkle throughout, the piece effectively brings-to-mind the glowing dawn of an early-morning sunrise.

Certain to aid in calming and centering the mind while gently lifting the spirits, Held In the Light is yet another impressively composed and arranged album from Dan Chadburn. He mostly plays these tunes with a gentle hand in a melodically straightforward manner, while possessing an elegant piano-playing style that feels centered and focused. Additionally, Dan offers sheet music via his website where you can also check out his other wonderful recordings! ~Candice Michelle

For more information please visit the artist's website. This album is also available at Amazon, iTunes, and more

This review was originally published on Journeyscapes Radio on 10/21/17.