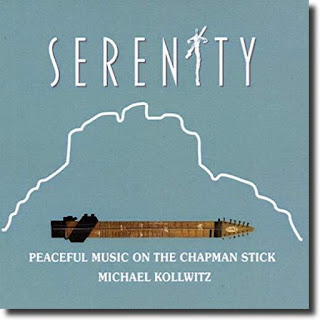 Michael Kollwitz has been playing the Chapman Stick for over forty years, having recorded his first solo album on this widely lesser-known instrument in the early 2000’s. A guitar/piano type of hybrid named for its inventor, Emmett Chapman (of whom Michael had the serendipitous opportunity of crossing paths with in the 1970’s), the Chapman Stick resembles the head and neck of a guitar but is played more like a piano by using two-handed tapping, and it possesses the capacity of producing a diverse range of sounds. While there aren’t many stick players on the music scene, I became familiar with its innately soothing sound upon hearing Jeff Pearce’s solo Chapman Stick recording, Rainshadow Sky, several years ago – so I’m certainly delighted to have discovered another master of this instrument! Having previously lived in Sacramento, California, Michael would perform on his stick while dressed as a 19th century gold miner, and he even opened for acts such as The Beach Boys and Goo Goo dolls. After moving to Hawaii in 2007, Michael encountered Carlos Santana who praised his talents, and later Mick Fleetwood who inspired him to play traditional Hawaiian music on the instrument. His 2017 album, Serenity, is a continuation of that Hawaiian influence and offers fourteen compositions spanning just over an hour of Pacific-imbued tranquility.

Right from the opening piece, “Mountain Sanctuary”, it’s the beautifully calm and intimate melodies themselves that emerge as the most captivating element on the album – expressed through the vehicle of Michael’s equally beautiful instrument. Evocative of the sand and sea, the listener’s mind is easily transported to a Polynesian paradise via the leisurely arrangements of softly layered textures and atmospheric tones. Providing a listening space in which to relax and unwind, these lulling soundscapes can be appreciated as either background music or via active listening engagement. The song titles themselves suggest themes of both landscape and life experiences – such as the composition, “A New Life”, which inspires a sense of hope and remembrance; “Quiet Full Moon”, an introspective piece that portrays a scene of the lunar light reflecting upon the waters; or “Joyful Reunion”, which elicits a gentle mood of winding down after seaside festivities. One of my favorite melodies on the album is that of “Simple Pleasures”, which seemingly sways and gently rolls like ocean waves in the glow of a setting sun.

Amazed by how this rather simple looking instrument can produce these subtly dimensional soundscapes, Serenity perfectly showcases the sheer sonic beauty and gentle emotional expression of which the Chapman Stick is capable. For those unfamiliar with the body of Michael Kollwitz’ work, this album is a most excellent starting point, as well as easily his finest, thereby offering a suspended moment to get lost in, where the blue seas, clear skies and cool breeze is seemingly endless! ~Candice Michelle

For more information, please visit the artist's website. This album is available at Amazon and other retail & streaming platforms.
at October 20, 2017