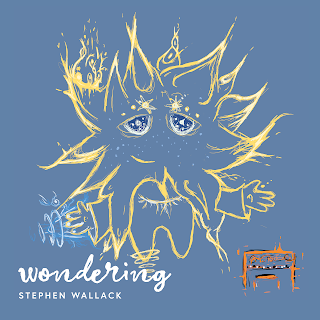 For his latest album, titled Wondering, Stephen Wallack embarks on a journey of exploration of single themes and topics as a way of coming to terms with the many questions surrounding the events of the past several months.

The opening "Beyond" starts with a constant key which maintains its form like a frame to hold the fluttering and twinkling keys that follow. Similarly, in "Remember", a single key serves as an anchor for the surrounding notes.

“Sorry” and “Bridges” give the sense of a conversation; the former, with depth and pauses, brings forth the increased tempo that contributes to the feel and urgency of someone pleading, perhaps apologizing? Meanwhile, the latter “Bridges”, takes soft careful steps like crossing over to meet the other side - reconciliation or new adventure?

“Games” and “Wolves” both embody a direct and determined character as if guided by a predestined goal. I could not help but think of galloping horses on a polo field when I listened to “Royals”. Perhaps the title led me that way but I did not mind; it was a very pleasant ride.

Wallack concludes his exploration with the delicate and mellow “Goodbye”. It is not a long, drawn out farewell but more of a recognition and validation of the many changes and indeed questions brought up in recent history. Stephen Wallack delivers a sensitive and thoughtful musical collection for us to draw upon as we consider our own questions. 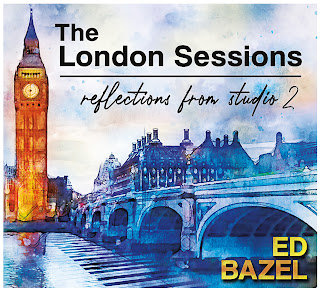 Pianist Ed Bazel delivers an inspirational and soothing collection of pieces curated to highlight the artist's mementos in life experiences.

The London Sessions: Reflections from Studio 2 opens with “Morning Glory” which feels silky under Bazel’s expert command of the piano keys. It is a piece full of possibility and joyous expectation. In the following title, “Mountain Serenity” as well as the later piece, “Mountain Joy,” I felt a particular familiarity to the theme of stillness and awe these two pieces presented since I have the blessing of going to the mountains frequently to enjoy the scenery mother nature provides.

Bazel’s sensitive interpretation of the Beatles’ “In My Life” and “Yesterday,” is a nod to the germinating musical interests of his childhood, and a recognition of the impact the “Fab Four” had on his life. It is also fitting for him to take on these songs at the revered Studio 2 in Abbey Road Studios.

I found that “Old Friends” and “After the Rain” have a touch of the Barry Manilow style of reminiscing with a melancholy twist.

Bazel’s confidence in his piano prowess is ever present in the category of quiet and soothing music especially in pieces like “Soaring” and “Daydream” (perfect background music for calming nerves).

Bazel’s involvement in the music sphere as well as his passion for adventure and discovery, permeates his work and bathes it with a sense of simple joy and gratitude. He is an artist whose style is not flashy or long-winded and yet captures the listener’s interest through the universal quality of affection for the joy of music. 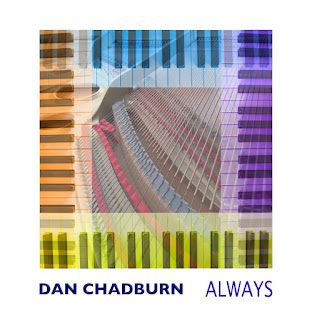 A native of Oregon, professional musician and performer Dan Chadburn is a seasoned pianist, composer, arranger, and singer/songwriter with an extensive repertoire. Dan obtained a master’s degree in music in electro-acoustic composition at City University in London and has established himself as pianist extraordinaire, becoming a favourite in the new age/contemporary instrumental/solo piano genre. Additionally, his music and albums have received multiple awards and nominations. Past performance venues have included Carnegie Hall (New York), Symphony Hall (Boston) and The Kennedy Center (Washington, DC).

Dan’s latest album titled Always, released August 1, 2022 and recorded & mastered at Piano Haven Studio, is his ninth album so far in said genre and again he offers the listener a quiet and peaceful respite from the cares of a restless world. In Dan’s own words: “In recording ALWAYS, I wanted to create a collection of pieces for solo piano that celebrates the unfailing resilience of the human spirit, the steadfast courage of the human heart, the eternal existence and mystery of the human soul, and the remarkable, spiritual synchronicity of them all.”

Artistic, classy, and quiet, Dan’s music is infused with qualities of hope, reassurance, and mindful serenity. From the first song and title track “Always” to the last tune “Final Curtain” the album is like a soft pillow providing comfort and rest for a weary traveller, filling any empty spaces with warm tones and happy thoughts of everything that is beautiful in life. The arrangements are light and simple and the song titles thought-provoking and poignant. Dan gives us just enough to engage but not overwhelm; a loving, musical offering from a deep part of his soul. Dan composed all songs on the album except for “O Shenandoah”, which by the way he did an exquisite arrangement on this classic and beloved tune. It’s a favorite of mine and I love that he included it.

I enjoyed every tune on the album as I dimmed the lights, closed my eyes, and allowed the piano melodies to guide me into a meaningful and lovely listening experience.

Dan’s music has been deeply inspired by the people and events that shape our world. The profits generated by the sale of several tracks from Dan’s albums are donated to specific charitable organizations dear to his heart.

Kauai, Hawaii resident, pianist and composer Christopher Boscole first came to my attention with his highly-praised 2016 album Skipping on Daisies, which was soon followed up by his equally outstanding album Soul Dreams in 2017 – both of which were comprised of original new age-style solo piano compositions. His 13th album, Isle of Shadows: A New Age of Classical Piano, revisits the style and theme of his 2014 release, A New Age of Classical Piano, consisting of classical-style solo piano renditions of both renowned and lesser-known pieces by several classical composers.

The fifth track, “Pavane Op. 50”, another piece by Fauré, is one of my personal favorites that will be familiar to many listeners. Lulling, mysterious and unquestionably timeless, it has enjoyed many stylistic reworks in modern times, spanning genres of trance, chillout, orchestral, and of course solo piano, as beautifully rendered here.

Equally enchanting is the seventh track, “Sonata No. 14 in C-Sharp Minor, Op. 27 No. 2 “Moonlight”: I. Adagio sostenuto” by Beethoven, or as it is more famously known: “Moonlight Sonata”, an unmistakably haunting, sensuous and somewhat somber piece.

Concluding the album is a Boscole original titled “Until We Meet Again”, which effortlessly bridges the classical with the contemporary for an expressively cascading and mellifluous performance!


A refreshing 2-hour episode of contemporary instrumental, world, classical & new age music from across the globe.