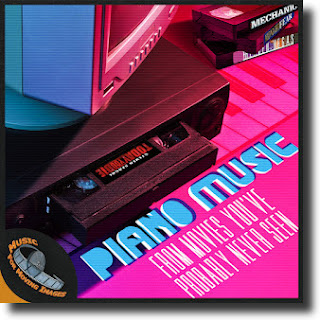 On his latest CD Stephen Edwards takes us back to the movies (and a television show plus a couple of documentaries), to explore some pieces from lesser-known film work spanning from the early ‘90s to the present.

The CD is organized chronologically along the composers’ film score career. The first two tracks, from the film Midnight Fear, display Edwards’ command of the piano with decisive in-step key playing in “Bed to Hayknife”, to the careful and slow cascade of “Jen’s Theme”.

Each successive piece forms an overall picture of somber and ominous situations where the listener can imagine a character regretting a relationship, as in “The Minister’s Wife” and “Illegal in Blue”, or confronting an enemy as in “Nocturne of the Sea” and “Piano and Innocence”.

In “Man With a Gun”, Edwards embraces a jazz flair reminiscent of the film The Firm from the John Grisham novel where the tone and pace of the piece reflect a sense of urgency surrounding the characters’ decisions. The jazz model returns in “Requiem for My Mother Stride Piano” but in a quirkier style.

There is a vein of resignation to the uncomfortable, whether it is due to forces outside of our control such as the droids in “Armed and Deadly” and “Project Shadowchaser” or fears from within as in “Heaven or Vegas”, the somber “Theme From Romeo and Jewel” or “Intervention Main Title”, that runs through these compositions, giving them a unifying design.

Through these works, Edwards shares his gift of translating a feeling or a mindset from the visual, and taps into the human need for relationships and the complex repercussions from such need.