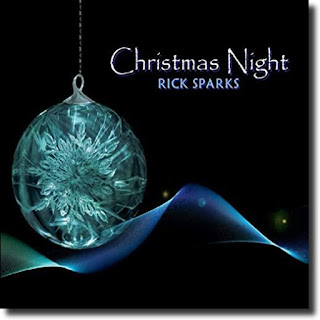 Rick Sparks is a pianist and composer whose recordings have been warmly received in neoclassical, new age and contemporary instrumental music circles. He also heads-up the long-running internet radio station The Cove on Live365 which has been a leader in the field for many years. Having begun piano lessons at age seven, Rick subsequently lent decades of service as a church pianist and earned a master’s degree in music. Influenced by iconic pianists such as George Winston and Jim Brickman, he eventually went on to release his debut album, Christmas Love, in 2007. Followed up by a handful of albums over the years, Rick recorded another Christmas album in 2020, which is his latest titled Christmas Night.

Comprised of ten compositions spanning approximately forty-three minutes, Christmas Night was partly inspired by the annual BBC broadcast of the King’s College Christmas Eve service in Cambridge, England. The ensuing result is one of the most magical albums of the season, with its synthesized arrangements of familiar carols and two originals prominently featuring celestial choirs, glistening bells and classical strings throughout.

One of my favorite pieces on the album is the opening title track, “Christmas Night”, which along with the closing piece, "Nativity", was composed by Rick. Delicately whimsical, it convey a wintry ballet feel that conjures images of falling snowflakes and the smell of evergreen trees. Also noteworthy is Rick’s uniquely varied rendition of “In the Bleak Midwinter”, which is led by a gentle piano melody accompanied by textural choral figures.

Not surprisingly, one of the album's most soothing compositions is the classic Christmas lullaby “Silent Night”, and if I didn’t know otherwise, I could have easily mistaken this rendition for fellow new age music artist Liquid Mind. Musically evocative of heavenly realms and radiant streams of light, an alternate piano variation comes in towards the end as the melody seemingly moves in a cinematically ascending pattern towards the sky.

Enthusiastically recommended to fans of both Christmas carols and peaceful synthesizer music, Christmas Night is a beautiful expression of Rick’s personal faith and musical talent, which is suitable not just for Christmastime but all winter long! ~Candice Michelle

Available at Amazon, iTunes and other online music retailers. For more information, please visit the artist’s website.
at December 23, 2020