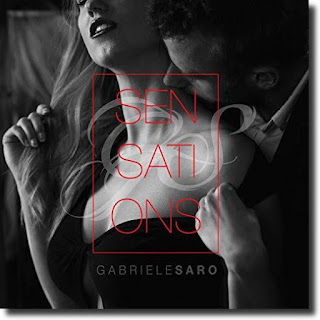 Gabriele Saro is an Italian-born composer who cites music and composition as his greatest passion among other keen interests. Fond of many musical genres and styles, especially soundtracks, he’s garnered several awards over the course of his career, including for documentary film scores.

“Morrow” opens the album on a sunny note, with piano being accompanied by strings at about the midway point like a companion joining a partner. These elegantly performed instruments seemingly dance and duel throughout, parting briefly at times, only to be reunited again for another rendezvous. A perfect example is the lovely third track, “Bliss”, which might paint any number of romantically scenic images, such as that of a couple on a small boat sailing in the sunset.

Likewise, other compositions seemingly bask in the moonlight, including the nocturnally mesmerizing “Merriment”. On this piece, stark chords pronounced by minor keystrokes outwardly blossom along the registers, only to coalesce in the lower range at quieter intervals. Displaying an intriguing pattern, the compositional arrangement can be likened to that of retreating beneath the surface and then rising above it to take another breath every now and again.

Another highlight, “Contrasts”, ingeniously demonstrates the song’s conceptual narrative by showcasing piano and strings energetically spinning into a tight cluster, before releasing into a dreamily drifting interlude. The equally noteworthy “Torments” features a beautiful solo piano melody that seemingly elicits a mood of waiting in solitude. Characterized by evolvingly uninterrupted ebbing and flowing figures, the structure of this piece can be likened to a river current that occasionally intensifies into raging rapids.

Finally, the album concludes with a piece on piano and strings titled “Serenity”, which aptly conveys the serene contentment and joyful sentimentalism of a romantic reverie.

Passionate, emotional and always supremely elegant, SensationS is the perfect album to put on while enjoying a romantic dinner, or to create a sophisticated ambiance, or simply, for when you just want to get swept up in the ardor of the music itself and nothing else. Filed under both the Classical and New Age genres, the music herein is unquestionably more descriptive of the former, though it will certainly appeal to many fans of the latter.

Inspired to check out more of Gabriele Saro’s work, SensationS is a sensational compendium of modern classical music! ~Candice Michelle

For more information please visit the artist's website. This album is also available at Amazon and other retail & streaming platforms.