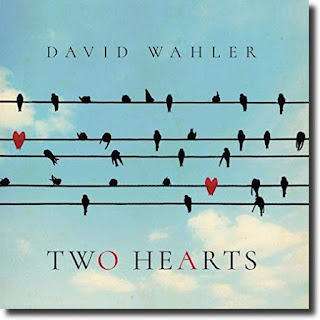 In addition to having enjoyed a successful career in Interior Design, acclaimed composer David Wahler has also released a string of outstanding albums over the past several years which have been particularly well received among contemporary instrumental and new age music circles.

On what could fittingly be described as "romantic lullabies for lovers", Two Hearts is imbued with a Greek mythical semblance that seemingly relates the story of a reunification of soulmates. Comprised of eleven enchanting compositions, the album showcases beautifully tender keyboard and woodwind melodies accompanied by delicate string textures, ethereal vocal pads and silky synth grooves.

Highlights include “Paris Rain”, a gorgeous number that feels evocative of sailing down a river beneath vivid constellations in the night sky, as shimmering sounds mimic twinkling stars and mist-filled waters. Speaking of constellations, “Night Sky of Orion (Remix)” is another prepossessing piece that similarly paints imagery of a starry firmament casting its light upon a watery abode, aptly conveyed by the composition's gently rippling outward figures and softly shuffling rhythm. Lastly, the mysterious “Confession” conveys a secret to tell and is perfectly illustrated by a haunting melody wrapped in a mythic aura of hidden halls and shadowy sirens.

In an utmost compliment, while listening to this recording, at times I was simultaneously reminded of new age landmark album Enchantment by Chris Spheeris and Paul Voudouris, as well as The Ambient Collection by Art of Noise.

For more information, please visit the artist's website. This album is also available at Amazon and other retail & streaming platforms.
at January 29, 2020