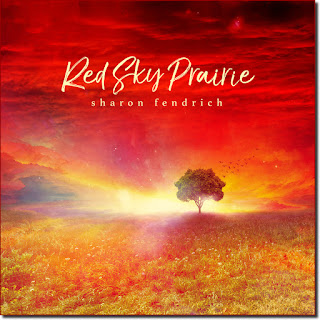 Employing heavenly choral and soprano vocals sung in English, Spanish, Latin and Yiddish along the way, Fendrich’s soul-elevating compositions create an atmosphere of divine love, peace and hope. Some outstanding examples include transcendently radiant “Song of the Dove”, an angelic aria sung in the international language of Esperanto. Fendrich also adds intriguingly subtle touches of magic throughout, one example being the sounds of crickets singing softly at the close of the album's title track. Several pieces touch on notably tender subjects, such as the September 11th dedicated final number, “That September Day”, which concludes the album with a pastoral sense of remembrance, healing and comfort.

Striking a perfect balance of innocence and maturity, Red Sky Prairie is a stunning accomplishment for an artist debut that will surely soothe the minds and hearts of many adults and children alike. Drawing inspiration from the new age, Celtic and classical music genres, listeners especially who enjoy everything from Secret Garden to David Lanz will find much to cherish herein. A serenely heartfelt album I’d say was long overdue within this wing of the genre, Red Sky Prairie is arguably one of the most outstanding neoclassical new age albums this year! ~Candice Michelle

For more information please visit the artist's website. This album is also available at Amazon, iTunes and other retail & streaming platforms.
at October 09, 2019