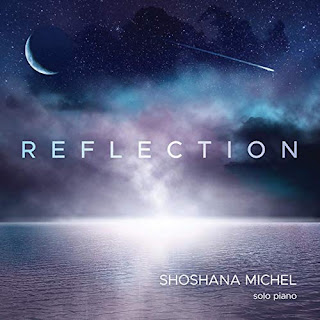 Shoshana Michel is an accomplished pianist and composer who’s been delightful to witness evolve as an artist over the past few years. Classically trained, she began piano lessons at age seven and has been playing professionally since she was seventeen. However, it wasn’t until many years later that she would release her debut solo piano album in 2015 titled Soul Whispers, which featured lovely arrangements of Chabad Nigunim (songs of Jewish Eastern European origin). Soon thereafter she would embark on the creation of her second album and first release of original compositions with her widely-acclaimed album Dancing on the Wind, easily proving herself not only as a skilled pianist and arranger but as a composer as well.

Conveying an atmosphere of serenity and solitude, the album’s artwork perfectly depicts the mood of the music, which often paints pacifying images of the sky, the stars and the sea. Avoiding any frenetic tendencies, Michel opts for arrangements that are melodically intricate yet calmly introspective over a theatrical power-playing style. Fitting for a spa setting or as accompaniment to the healing arts, her compositions effectively promote and nurture an inexplicable inner calm.

Another notable characteristic of Michel’s music is that she infuses many of her compositions with a unique element of sacredness that has seemingly been transferred from her Chabad Nigunim arrangements. This beautiful idiosyncrasy is most detectable on personal favorites such as “Shooting Stars”, “Soothing the Tempest Within”, “The Moon’s Lament” and “Labyrinth”.

For more information please visit the artist's website. This album is also available at Amazon, Bandcamp and Google Play.