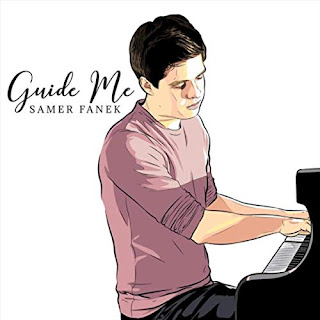 Coming off the heels of his acclaimed debut album is Polish-Jordanian pianist, keyboardist and composer Samer Fanek with his sophomore release called Guide Me. Like its predecessor, these eleven elegant compositions range from expressively epic to pristinely peaceful while spanning styles of neoclassical, contemporary instrumental and at times even orchestral rock. Although Samer arranged and produced this album at his home studio in Daly City, California, one might get the impression that it was recorded with a live performance ensemble due to the imposing symphonic characteristic of the compositions.

Appropriately, the album opens with a piece called “Grand Opening” that lends itself to a classical-rock motif. Almost a third of the album is fashioned in this more dramatic style including the title piece, “Guide Me”, which showcases beautifully rippling piano figures in the higher register accompanied by a wistful waltzing stanza. Pieces such as these would bode exceptionally well as a grand stage performance complete with live orchestra.

The album also features three reflective solo piano pieces, which includes “Long Time Ago”, “Guardian” and the final cut, “Back to Hometown”. However, Samer seems to hit a perfect sweet spot on compositions that lie somewhere in-between the two contrasting moods. My absolute favorite of these is “Newborn”, which seemingly conveys a nostalgic reminiscence, and in my view, is Samer’s most impressive musical piece to date. You could say it’s like his “One Man’s Dream”, which should come as no surprise given that Yanni is one of Samer’s most noticeable influences.

Ringing true to the album’s title, Guide Me seems to have been guided by a divine hand throughout its creation. Often wrapped in tender elegance, Samer’s compositions speak to some of life’s most cherished memories – births, weddings, anniversaries and reunions – as well as the intermittent trials that everyone faces along the way. Particularly recommended to fans of Yanni, Nobuo Uematsu and the classical crossover genre, Guide Me is an album of hope, potential and purpose that elevates Samer Fanek to the next level as a composer! ~Candice Michelle

For more information please visit the artist's website. This album is also available at Amazon, Google Play and CD Baby.
at April 25, 2019