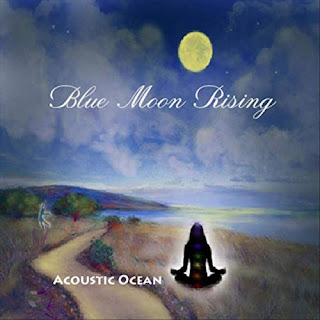 Acoustic Ocean was originally founded by Bette Phelan and the late Peggy Morgan. Having been musical partners for 40 years, the duo released a total of three albums and toured together for 20 years before Peggy sadly passed away in 2016. Continuing in the same visionary spirit as the project’s musical legacy, Acoustic Ocean’s fourth album, entitled Blue Moon Rising, is tenderly dedicated to both Peggy Morgan and Bette’s mother, Nancy Phelan.

Highlights include the opening piece, “A Hui Hou (Until We Meet Again)”, which seemingly bodes as the perfect homage to Phelan’s longtime musical partner. This somewhat wistful yet warmly comforting tune showcases softly cascading guitar accompanied by gentle strings, of which perhaps can be likened to the refreshing serenity of a light rain shower.

One of my favorite compositions herein is the title track, “Blue Moon Rising”, which opens with the nocturnal sounds of rainstick and chirping crickets. Bearing a notable Celtic touch expressed by its warmly engaging acoustic ensemble, this enchanting piece brings-to-mind cozy images of a campfire in the woods.

Lending itself as the perfect relaxation soundtrack while never once descending into forgettable background music, Blue Moon Rising boasts subtly layered acoustics and spacious organic soundscapes of pristine beauty and reflective soulfulness. Surely Peggy Morgan would be proud of Bette Phelan’s profoundly touching musical accomplishment, as this one is certainly destined to be among this year’s best acoustic albums! ~Candice Michelle

This album is available at Amazon, iTunes, Google Play and CD Baby.