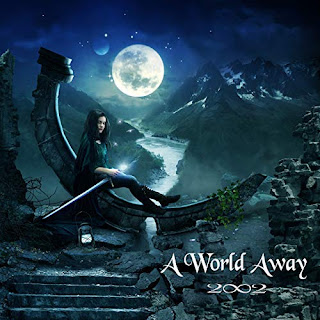 2002 began as the husband/wife duo of Randy and Pamela Copus who released their widely successful debut album Wings in 1992. Initially making their mark on the scene with a traditionally ‘new age’ style in the vein of Herb Ernst or Liquid Mind, the band gradually evolved over the years to adopt more symphonic and neoclassical signatures, such as on their notable 2000 release River of Stars, which employed classical strings and wordless ethereal vocal layers reminiscent of Enya. Evolving ever still, 2002 started incorporating gentle progressive rock elements (as heard on their 2012 album Believe) with Randy’s lyrical-vocal style impressively recalling that of Jon Anderson’s. By the time their 2014 album Trail of Dreams rolled around, Randy and Pamela’s daughter Sarah Copus had joined the line-up as lead vocalist, officially becoming the band’s third member. Comprised of ten alluring compositions, 2002’s latest album entitled A World Away is themed around a cosmic love story of kindred spirits traveling together among different worlds and time periods, becoming lost along the way until eventually reuniting, as if the music were playing out like the soundtrack to a fantasy romance novel. Together the trio not only provide vocals, but play a variety of Celtic, classical and acoustic instruments plus keyboards/synthesizers.

From the opening piece “Dream of Life” the listener is seemingly swept up on a magical night-flight guided by the song’s choral-pop vocal arrangement, which is feathered among a richly cinematic soundscape likewise mirrored on other compositions such as “Butterfly”, “Stars and Moon” and “Strings of Your Heart”. One of my favorite pieces is “Finding You”, which unfolds like a Celtic lullaby with its tender harp and gentle guitar. Randy’s progressive rock influences are especially noted on “To Live Again”, which he beautifully sings to a gentle arrangement of piano and symphony. “Memory of Tomorrow” is perhaps the ultimate highlight for me; the most haunting piece on the album due to its mysterious, minor key affections along the way, it enchantingly lulls the listener into a dreamlike haze.

Collectively, the lyrical vocal portions on this album are somewhat reminiscent of the male/female ‘new age’ music duo Llewellyn of whom I’m also a longtime fan. Additionally, the gorgeous CD booklet includes the songs’ inspiringly romantic and celestially poetic lyrics accompanied by stunning fantasy-nature artwork. Overall sweet and sparkling yet rich in depth, A World Away is, unsurprisingly, another top-notch album from 2002 that will likely appeal to fans of Enya, Llewellyn and Jon Anderson, as well as lovers of Celtic, ethereal and fantasy music! ~Candice Michelle

For more information please visit the artist's website. This album is also available at Amazon, iTunes, Google Play and CD Baby.
at October 18, 2018