Album Review: The Waters of Glacier by Jill Haley 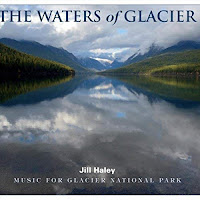 Composer and instrumentalist Jill Haley has made multiple appearances on other musicians’ recordings. However, she is also an outstanding solo performer in her own right who has released several impressive albums to date. What’s especially enjoyable about her solo works is her continuing theme of exploring the magnificent wonders of United States National Parks through her music. With previous albums that include Glacier Soundscapes, Zion and Bryce Canyon Soundscapes, Mesa Verde Soundscapes and National Park Soundscapes, Jill’s music draws its inspiration from scenic deserts, forests, lakes and mountains across the U.S. map. Her latest album, The Waters of Glacier, is a sonic tribute to Glacier National Park, of which is located in northernmost Montana and bordering on Canada. Comprised of twelve instrumental ensemble pieces, the album features Jill on piano, oboe, English horn and handbells – plus supporting roles throughout courtesy of Dana Cullen on horn, David Cullen on guitar, Michael Manring on bass, and Tom Eaton on electric guitar, keyboards and bass.

The first track, “Clouds of Apgar Range”, is a somewhat unexpected opening from the norm, with its gorgeous, meditative handbells creating an almost reverent atmosphere. Gentle piano is subsequently introduced followed by Jill’s signature English horn, until the piece eventually concludes with the return of the handbells. “Rain on Huckleberry Mountain” is a relaxing, pastoral piece comprised of solo piano and English horn that aptly paints a picture of rain on a mountain. “Glacial Lakes” begins with gorgeous acoustic guitar figures from David Cullen, and evokes the wide-open spaces that Alex de Grassi conveyed so well in his Windham Hill years. Here, Jill’s English horn weaves a lovely melody inside David’s fingerpicked guitar.

“First Passageway” opens with mysterious piano chords followed by horn playing a melancholic melody in the lower pitch – while “Running Eagle Falls” begins with a bright piano figure as Jill’s oboe matches the piano in its upbeat, optimistic melody. A lone oboe opens “Falling Gold”, until minor-key piano enters the scene, then quickly shifts to major-key with an accompaniment of subtle bass and electric guitar. One notable observation I have, is that all these lovely pieces work so well because when composing them, Jill leaves plenty of space for each lead instrument so that they’re never wrestling one another for the spotlight.

“Frost Tinged Evergreens” sounds as captivating as its title suggests, with the piece’s contemplative pairing of simple piano and oboe conveying a ting of cold to it. David’s guitar returns for “Montana Rivers”, which is likewise accompanied by Michael Manring’s signature bass, along with Jill’s acrobatic (but never overplayed) oboe lines. “Ox-Bow Point” is perhaps the most solemn piece on the album with its almost ceremonious-like trio of horn, oboe and English horn. The aptly-titled “Ripples on Two Medicine Lake” is also one of my favorites, on which gently cascading piano is accentuated by the yearning touch of English horn. Another favorite is “October Snow”, which begins with a lonely piano motif followed by English horn. Shifting into a gentle darkness towards the middle part, the horn seemingly becomes its own voice that speaks to the coming of winter. Lastly, “Solitude” is a beautiful album closer appropriately comprised of solo piano – and effectively brings-to-mind some of Liz Story’s more reflective works.

An overall contemplative album from an accomplished recording artist, The Waters of Glacier perhaps boasts some of Jill Haley’s finest work yet. Additionally, fans of the classic Windham Hill sound will likely be particularly enthused with this fantastic release! ~Candice Michelle