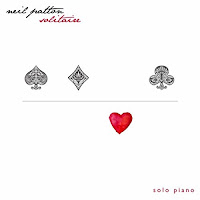 Neil Patton is a supremely talented composer and pianist/keyboardist (as well as a singer – although I’ve yet to hear him in that capacity) whose released four solo piano albums to date. His latest album, entitled Solitaire, is comprised of 15 outstanding compositions spanning a little over an hour – and follows-up his fantastic release, Between Shadow and Light, which was one of my personal favorite solo piano recordings of last year.

The album opens with “The Turning Page” – a delicate, brisk-paced number that initially begins with a light and fluttery melody played in the higher register, as it increasingly adds more fullness via lower register chords along its course. Aptly setting the pace for the rest of the album, Neil expressively yet gracefully takes the listener on an inner journey that captures both hopeful, joyful moments as well as solemn, introspective moods, as he brilliantly performs on the keys with seemingly perfect ease and fluidity.

One particularly notable piece is “Walking on Air”, which recalls a hint of George Winston. Characterized by a colorfully radiant and vivid melody, the composition is seemingly punctuated by spiraling bursts of energy.

Another favorite of mine is “The Muse”, which pleasantly recalls some of Liz Story’s work, as it effectively showcases a constantly-changing pattern that sparkles and spins throughout. I’m also especially fond of “Twilight” – a boldly cinematic yet contemplative piece that bears touches of David Lanz. Here, Neil impressively creates a three-dimensional effect with his remarkable playing technique.

As with his previous album, Between Shadow and Light, Neil has once again saved the best for last (for me anyway) in the form of a similarly darker, lengthier composition entitled “Gethsemane”. Named for the urban garden at the foot of the Mount of Olives in Jerusalem, of which is probably best-known for being the place where Jesus prayed the night before his crucifixion, this hauntingly beautiful number imparts an aptly mysterious, reflective mood. Here, Neil employs some gentle digital delay and liberal amount of reverb to create an all-encompassing, epic sound – making this one of my favorite solo piano pieces to emerge from an artist in a long time.

A truly exceptionable and professional talent, Neil Patton’s piano-playing is unquestionably top-notch – with his instrument always emitting a most lovely resonance. Additionally, Neil’s enthralling compositional style and perfected execution of these melodies uniquely stands out among many of his contemporaries, as well as places him in great company among some of the best in the field – hence, I can already conclude that Solitaire is destined to be named among the finest solo-piano releases of the year! ~Candice Michelle