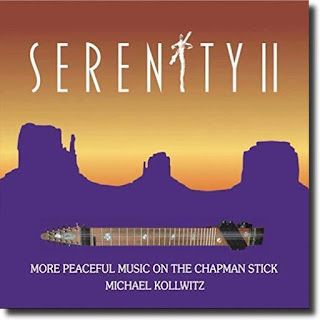 Michael Kollwitz is a lifelong master of the Chapman Stick – a guitar/piano type of hybrid instrument in both its sound and functionality, which resembles the head and neck of guitar but is played more like a piano by using two-handed tapping. Having previously lived in Sacramento, California before relocating to Hawaii in 2007, Kollwitz’ latest album, entitled Serenity II: More Peaceful Music on the Chapman Stick, was recorded in beautiful Sedona, Arizona. His 22nd album to date – and 2nd album marketed in the “new age” genre – Serenity II embarks along a similar musical path as its equally mesmerizing predecessor, Serenity, in the form of 16 instrumental compositions that were inspired by the book Steps to Knowledge: The Book of Inner Knowing by Marshall Vian Summers.

The album opens with “The Presence”, an earthy and soul-soothing piece that perfectly sets the mood for the rest to follow, as a balmy melody washes over the senses like a warm current. Kollwitz’ signature sound is intimately cozy and leisurely, as he seemingly merges the equally spellbinding albeit naturally contrasting environments of the Hawaiian pacific with the Arizona desert, often within the same composition. The melodies mostly possess a dreamy, fluid quality that is frequently enhanced by atmospheric backlighting in the form of subtly shimmering and suspended tones, which lend the compositions additional depth and richness.

Thoughtful song titles allude to themes of personal reflection, whether it be inwards upon one’s own feelings and emotions or outwards upon surrounding natural landscapes, as one might easily imagine themselves cozying up by a fireplace, relaxing by the Oceanside, or peering out into a sunset canyon from a mountaintop.

While it’s difficult for me to choose a favorite track on this album – being that every composition is as equally compelling as the next – after repeated listens, I did find myself particularly drawn to “Climbing the Mountain” and “Blue Skies”.

Although an electric instrument, the Chapman Stick emits an organic sound that would naturally appeal to fans of atmospheric and relaxing acoustic music. All in all, fans of Michael Kollwitz’ previous album, Serenity – as well as Jeff Pearce’s stylistically similar landmark album on the Chapman Stick entitled Rainshadow Sky – are enthusiastically encouraged to add Serenity II to their personal collection! ~Candice Michelle