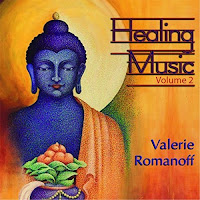 Valerie Romanoff is an innovative and versatile multi-instrumentalist who’s explored a variety of musical styles. The second installment of her Healing Music series meant to uplift and soothe the soul, Healing Music, Vol. 2 is a fantastic double-album comprised of 18 compositions spanning over 2 hours. Alternating between groovier cuts denoted as “chill” and more meditative pieces denoted as “still”, Healing Music, Vol. 2 is an overall chic and semi-exotic blend of acoustic, meditation and world beat styles of music. Throughout the album, Romanoff plays guitar, piano and synthesizers, while she’s joined by Steven McNamara on sitar and Tom Rossi on flute, kora and percussion.

“Pink Skies Over Still Water (Still)” opens the album with a soul-soothing soundscape of spacious chords, brushes of sitar and gentle acoustic guitar. Seemingly evocative of a misty morning, the collective instruments immediately instill a sense of serenity among nature. “Pink Skies Over Waves (Still)” continues in this melodiously tranquil mode, while adding subtle touches of flute along the way, as elements of both Eastern and Western acoustic music are seamlessly woven into a sonic tapestry of organic resonance. The next track, “Beyond the Bend (Chill)”, is one of my favorites – and as its title suggests, turns up the tempo a few notches. Simultaneously relaxing and rhythmically hypnotic, the piece is guided along by Indian tabla drums, as intonations of “Om” underlie a colorful arrangement of South Asian instruments – effectively bringing-to-mind scenic images of a sacred temple overlooking a lotus pond. Another one of my favorite pieces is “Moving Glass (Still)”, which sounds a bit less “exotic” and perhaps more familiar to Western ears compared to most of the other compositions. A mesmerizing piece characterized by liquid layers of electric guitar and balmy atmospheric textures, it seemingly alludes to a paradisal destination of golden sunset beaches.

Romanoff likewise incorporates elements of traditional Raga music while maintaining a western musical sensibility throughout. Additionally, she’s included radio edits of all the original tracks on the second half of the album, as some listeners and radio programmers certainly appreciate the convenience of being able to opt for shorter versions of lengthier compositions.

Despite first glance at the album’s generic-seeming title and Buddha cover artwork (of which is nonetheless beautifully depicted), I genuinely enjoyed Healing Music, Vol. 2 immensely. Indian instruments and Eastern spiritual themes have long been a staple of the “new age” and world-beat genres and as a result, much of it tends to sound cliché – but not so with this wonderful album. Crafted with utmost professionalism that seemingly suggests an inherent sense within the artist of knowing when less is more, Healing Music, Vol. 2 boasts a majestic array of delightful-sounding instruments that engulf the listening space without overwhelming it. All in all, this is the perfect “chill-out yoga” music for transporting the mind to an idyllic soul retreat! ~Candice Michelle

For more information please visit the artist's website. This album is also available at Amazon, iTunes, and Google Play.
at March 29, 2018