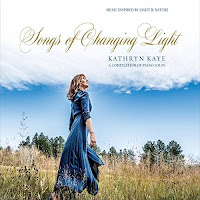 Kathryn Kaye is a pianist and composer who has previously released six albums. Her seventh album, Songs of Changing Light, is a collection of thirteen solo-piano works from her past releases of which prominently feature subtle ensemble arrangements. Characteristically gentle, reflective and softly-lit while occasionally basking in the shade of more shadowy atmospheres, Kathryn’s music mostly revolves around themes of nature, changing seasons and the passing of time. As with her previous albums, Songs of Changing Light was produced by Will Ackerman and co-produced by Tom Eaton along with herself – and likewise recorded at Will’s own Imaginary Road Studio in Vermont.

Opening the album is “Winter’s Deepest Sleep”, a lovely piece that begins with a moderately-paced melody while injecting thoughtful pauses along way. Although its title may allude to a cold winter’s night, the piece feels quite comfortingly warm and more akin to that of cozying up by a fireplace. On “Summer Afternoon” Kathryn’s left-hand moves at a waltzing pace, while her right-hand employs softly tinkling notes up-and-down the keys. Gentle and leisurely with a lightly-swaying motif, one might aptly imagine rocking on a swing or hammock on a summer afternoon. “Taos Song” is a contemplative tune that showcases bolder chords with smoothly rounded edges, while “Heavy as a Feather” exudes a lightly-dancing quality with a gentle touch of wistfulness. Possessing more neoclassical underpinnings, this piece is one of my favorites.

The introspective yet softly buoyant “A Rose in Winter” opens with delicate keystrokes in the upper register, until mid-range chords join in towards the midway point. Comparatively, the elegantly understated “Distances” resonantly hovers in the lower register and is another one of my favorites; its title may either or simultaneously refer to distances of land or the space between two people. “Dreaming Still” nicely follows it up with an equally introspective and slower-paced melody. Ensuing next is “A Lark in the Last Light of Day”, which starts off rather cautiously, before unexpectedly bubbling over with radiantly resonating chords that soon revert to the piece's original motif. “Willow Waltz” could easily allude to a willow trees’ branches gently swaying in the wind. Similarly, the drifty notes and rolling undercurrent of “Adrift in Fading Light” (another favorite) might suggest a sailboat slowly drifting over the horizon.

“So Much Sky” feels more open and outward-flowing with a melodically colorful range. It’s followed up by “There was a Time”, which imparts a reflective and tender mood with a touch of sentimentality. And finally, “Frost” perfectly concludes the album as another one of my favorites. Here, Kathryn plays a lightly drifty melody with her right hand in the upper register, while employing a gentle give-and-take maneuver of her left hand in the lower registers – overall creating a shimmery effect like that of moonlit snow.

Never one to be excessively elaborate in her musical approach, I’ve always particularly enjoyed Kathryn Kaye’s thoughtful, down-to-earth and nonintrusive piano-playing style. For those who’ve enjoyed her past works, but would like to pick out the solo piano pieces on those, this is a worthy collection to own. Likewise, fans of solo piano music who are new to Kathryn’s music will find Songs of Changing Light a great place to start! ~Candice Michelle

For more information please visit the artist's website. This album is also available at Amazon, iTunes, CD Baby and Google Play.
at February 07, 2018