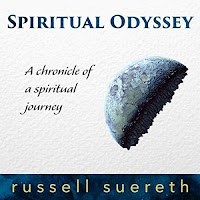 Spiritual Odyssey is the fourth album by electronic keyboardist, composer and vocalist Russell Suereth. Having initially released a couple of 60’s-influenced pop/rock albums, Russell markedly shifted his musical focus to the loosely-defined “new age” genre with his all-instrumental third release entitled Spiritual Haven that drew upon subtle ethnic influences. Continuing his sonic exploration of transcendental themes, Russell seems to have both literally and figuratively found his voice with Spiritual Odyssey – an album that easily outshines his previous releases to a remarkable extent. Singing in an airily carefree and low-key style that’s complimented by dreamy synthesized textures and subtle world-tinged rhythms, Russell’s melodies often bear reminiscence to that of both The Beloved and The Alan Parsons Project.

Comprised of ten compositions spanning 40 minutes, Spiritual Odyssey opens with “Break the Chains”, as Russell sings mystical lyrics amid an ethereal fog of reverberating synth pads and subtle tribal percussion. As if being swept up on a magical carpet ride across the moonlit sky, a lunar glow is seemingly reflected upon the album's billowy cloudlike atmospheres, which are enthrallingly enhanced by the echoing, smoothed-out effect applied to Russell’s vocals. On the following track, “My Beating Heart”, his voice is layered with additional harmonies that are set to breezy percussion and softly muted bell-tones, which collectively elicit a curiously mesmerizing, almost whimsical essence. The ensuing “Where Will I Go” is one of my favorite songs on the album; its otherworldly haze and gently pulsing rhythm encompassing Russell’s resonating lyrical passages that offer lines such as “searching for the password to my life”.

The aptly-named “A Ride to Virgo” perfectly captures a childlike inquisitiveness – particularly that of perceiving the constellations to be much nearer to earth than they are. On this piece, Russell infuses a bit of Indian sitar, as one might imagine themselves sailing at sea while gazing upon the night sky. “So Far Away” also similarly embodies an alluring, quirky innocence with Russell singing the opening line, “When I fly through the cobalt skies, I can see your eyes”, as well as asking, “Why are you so far away?”. Also notable is “The Walls Are Tumbling” with its lightly bouncing electronic textures accentuated by subtle strings and a lovely vocal melody.

Although mostly of a similar nature, the songs on this album are immensely enjoyable, with each one subsequently unfolding like a children’s fairytale or fantasy book. Likely to appeal to a variety of listeners, Spiritual Odyssey is surely Russell Suereth’s most impressive work to date – thereby setting him on a promising musical path that I would highly encourage he continue to pursue! ~Candice Michelle

For more information please check out the artist's website. This album is also available to purchase at Amazon, iTunes, CD Baby and Google Play.
at January 18, 2018