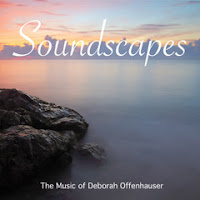 Deborah Offenhauser is a formally trained pianist and composer whose resume boasts an impressive list of accomplishments. Among these she has performed with renowned artists such as Isola Jones, The Four Lads, The Moody Blues and more, as well as having played piano with numerous Broadway shows. Additionally, Deborah’s music has landed various spots on television networks ABC, CBS and The Weather Channel in popular hit shows. More so, she is a highly versatile musician who also plays classical organ, mandolin, 5-string banjo, guitar and violin. Comprised of 13 compositions spanning a little over 65 minutes, Deborah’s latest album, Soundscapes, is a multi-instrumentalist ensemble project that integrates styles of jazz, classical, contemporary instrumental and world music while also incorporating elements of avant-garde and minimalist music.

“Decidedly Joyful” leads the album with a softly steady drumbeat and additional percussion possessing a tropical flair, which is subtly enhanced by the sound of ocean waves and sprinkling chimes. A leisurely, optimistic tune characterized by notable jazz influences, we’re soon introduced to an acoustic ensemble led by piano followed by saxophone and then ultimately flute. The next piece, “Free Radical”, incorporates classical strings that lend it a cinematic quality while also employing some buzzing synthesized textures along the way. Moving through different melodic and rhythmic phases, the piece transitions much like a short medley. The subsequent “Tanz” is my favorite composition on the album, beginning with nocturnal forest sounds and tinkling piano notes that immediately bring-to-mind a lush jungle. Resonating gong introduces Indian tabla and a subtle drumbeat, before an oboe ensues on lead melody playing an exotic, almost mid-eastern sounding scale, ultimately giving this world-tinged piece an intriguing journey-like feel. The minimalist “Spacial Palace” follows with ambient field noise that includes chirping birds, traffic sounds, human chatter and footsteps. More akin to a soundscape than a song, the piece is lightly adorned with various keyboard notes and effects, which eventually introduce a xylophone-type melody imbued with an East Asian feel. Next is “Through a Glass Darkly”, an elegant piece infused with neoclassical elements; it opens with singing birds and dreamy tonal waves that eventually lead into a more straightforward piano melody.

Appearing near the end of the album is another notable piece entitled “It Is Written”, which features piano, oboe and classical strings with soft brushes of acoustic guitar adding a perfect touch. Concluding with rolling waves and singing birds, the piece simultaneously conveys a sense of both solitary peace and tender romanticism. Following it up is “Tanninim”, another environmental passage characterized by chimes, string plucks and a repeating drum pulse throughout. And finally, the closing track, “The Wonderful Unfoldment of Blue”, reverts again to a more orchestral motif. Despite its title, the overall solemn, classical nature of this piece feels more visually evocative of vintage objects and photos in grainy black-and-white.

A musical chameleon of sorts, Deborah Offenhauser’s style is eclectic and hard to pigeonhole, which speaks to her versatility as both composer and performer. In conclusion, Soundscapes will likely most appeal to fans of neoclassical and contemporary instrumental music that possesses a uniquely experimental edge! ~Candice Michelle

For more information please visit the artist's website. This album can also be purchased on Amazon, iTunes, CD Baby and Google Play.
at January 23, 2018