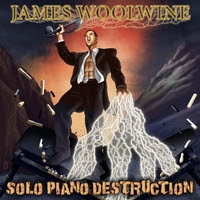 “Overkill” is a dramatic and lively opener that follows along a relatively unpredictable path (as do many of James’ compositions), expertly weaving all his classical influences into one while displaying bold touches among an intricate melodic arrangement. The aptly-named “Ivory Dance” follows next, skipping along in a buoyant manner to the many nuances of James’ dynamic and intricate finger-work. The pace slows down a bit with Katy Perry’s instantly recognizable “Firework”, on which James skillfully employs his own unique embellishments. Comprised of the same four chords as the original song but with variation on the bridge, the piece is distinguished throughout by its insertion of powerful keystrokes, with special emphasis towards the latter part in the lower registers. Serving somewhat as an interlude is “Meadows of Dan”, which lends subtle contrast to the former piece with its simple opening notes and more rural, down-to-earth vibe. Dedicated to James’ mother who likewise named the piece, it takes its inspiration from a place called Dan in his home state of Virginia. Originally written as a guitar piece, “Happy Accident” sprang forth from several spontaneous ideas that ultimately resulted in a solid composition. Reminiscent of sunlight pouring through the open window of a cottage in the countryside, the fresh scents of nature seemingly fill the air, as James’ fingers move like spinning tops throughout the registers of this spritely, sunny tune. Showing considerably more restraint is “New Bach Etude”, the album’s most elegant composition, as well as my favorite, with its subtle intrigue and new age overtones. An additional Katy Perry song is rendered on this album, with James lending his own twist to the catchy “Teenage Dream”, which was the first composition he did a formal arrangement of. “From Andy” closes out the album with a sophisticated effervescence, serving as an ode to guitarist Andy McKee of whom this composition was inspired by.

Classically intricate yet dynamically straightforward, there is certainly much to appreciate about James Woolwine’s compositional arrangements and piano-playing techniques. Positive, upbeat and packing a lot of oomph, Solo Piano Destruction would be particularly well-suited to a live performance setting that personally engages his audience. With a guitar-based album also currently in the works, I suspect this is only just the beginning of more rewarding musical outputs to come! ~Candice Michelle