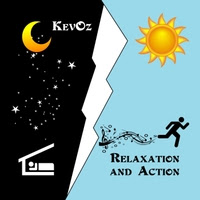 Relaxation and Action is the fourteenth album by electronic keyboardist and Chicago-area resident, Kevin Osborn, who releases his works under the name KevOz. Having composed music for over thirty years, he’s been profiled in Keyboard magazine and his Christmas music has been featured in Tokyo Disneyland’s Tomorrowland. Comprised of fourteen songs spanning fifty-seven minutes, Relaxation and Action is his first release in seven years of electronic instrumental music.

“Victory at Hand” is a buoyant and vibrant opener that moves at a traveling pace, with prominent bells providing the lead melody over an infectious rhythm and bassline. Bearing hallmarks of both Jean Michel Jarre and Mannheim Steamroller, one senses they’ve traveled back in time to the set of a 1980’s fantasy-adventure movie. Continuing in this vintage electronica motif is the aptly-named “Waves of Nostalgia”, which enters the stage with groovy tapping percussion, cinematic bells and a sprinkling of chimes. This piece reminds me of winter time, with its whimsical wonder bringing to mind a magical toy land. “Bongos in Flight” is one of my favorite tracks on the album, where spacey chords, airy piano notes and gentle tribal percussion exude a dreamily drifting essence. One particularly amusing track is “Epic Space Cola”, possessing a curious title that was likely inspired by Ray Lynch’s popular 80’s piece, “Celestial Soda Pop”. Beginning in a similar mode to the Lynch tune with its digital bleeps and blips, the song eventually gives way to a space-age motif full of rhythm and energy. Kevin seems to have injected a bit of quirky humor into this arrangement, which he undoubtedly had much fun composing. “Just You and Me” is another highlight, where dreamy piano and violin amidst a leisurely bass-laden tempo convey the carefree relaxation of swaying in a hammock on a summer afternoon. I’m also especially fond of “Magic Wand”, another atmospheric and spacey piece characterized by synthesized flutes and windy gusts with a wonderfully vintage appeal. “Zentronica” is another honorable mention for its East Asian nuances and distinctive techno flavor. This bouncy and colorful, faster-paced tune reminds me somewhat of a Cirque du Soleil performance. “Yoga Worship on Mars” is another favorite, albeit its title was probably intended to be taken in jest. Encroaching synthesizers and spacey chords slowly gain momentum on this exploratory composition, as if moving towards a sci-fi destination. “Purple Hearts” rounds-out the album in a spacey electronic-rock motif, making for an overall celebratory and cinematic conclusion.

While perhaps offering-up a bit more ‘action’ than ‘relaxation’, the compositions on Relaxation and Action could be best described as resembling 80’s and 90’s-era electronic new age music. This album infectiously grew on me with repeated listens, with it bearing notable comparisons to the works of Jean Michel Jarre, Ray Lynch, Mannheim Steamroller and even Richard Bone’s Coxa and Electropica albums. Those, especially, who may find themselves nostalgic for the style of many new age synthesizer albums released during those periods, by the aforementioned artists and others, are sure to enjoy this album immensely. ~Candice Michelle

This album is available at Amazon, iTunes and CD Baby.