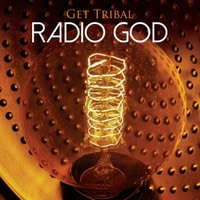 Radio God is Get Tribal’s follow-up to the award-nominated debut, God of Drum, a globally-inspired project by composer Kari Hohne. Drawing upon world mythologies and diverse cultures, as well as inspiration from music and films spanning several decades, she weaves these concepts into a blend of both ancient and modern rhythms within an electronic musical framework.

“Guip: Sunrise” opens the album with vintage keyboard sounds and digital effects that are set to a pronounced and plodding electro-drumbeat. Percussion takes center stage on this album, where a retro-urban vibe is gilded with an exotic flare, taking the listener on a journey through modern city streets, ancient roads and desert landscapes. “Ruah: Breathe” continues in this vein while picking up the pace a few notches, as Middle-Eastern flavors additionally season this steady composition, further characterized by legato strings and a minor-key piano riff. “Taba: Out of the Underworld” perhaps marks the album’s most definitive point. Inspired by the Epic of Gilgamesh of ancient Sumerian mythology, the piece begins with a windy rumble and piano loop that resurfaces throughout the tune. Bearing a slight sense of forbiddance with its distinctive tribal drums, one might easily imagine a gathering of dancers in a remote desert by firelight. “Adon: Across the Sea” is also curiously noteworthy, drawing influence from the Pacific islands with its Hawaiian and surf guitar, as a whimsical harp sample offsets the funkier rooted rhythm. The celebratory “Ankh: Dancing Desert” is another highlight which offers a fun fusion of ancient, exotic, vintage and western elements. The composition’s blending of traditional Middle-Eastern Dervish dance music with 80’s-style electronic instruments is especially well-captured here.

Uniquely venturesome and defying strict genre classification, Radio God is primarily about the beat where rhythm remains the focal point. Less defined by straightforward linear melodies, Kari finds an idiosyncratic motif that works within these mostly circular compositions and returns to it often, always inspiring the listener to move and groove! The album’s many retro-style elements and vintage electronic components, accentuated by culturally exotic and ancient themes, frequently bear the hallmarks of an old-world video game. An artist who possesses both rising potential and discernible passion for her work, I suspect only more intriguing and enjoyable outputs will flourish from the Get Tribal series. ~Candice Michelle

This album is available on Amazon, iTunes and CD Baby.