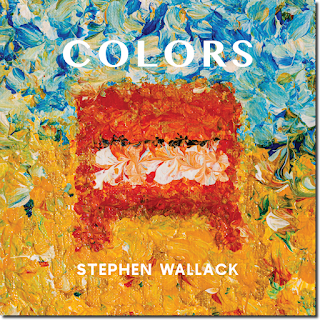 Listening to Colors by Stephen Wallack, I was struck by a sense of personal involvement in each composition, a sense that, for each piece I could imagine a place or person important to the artist. Beginning with “Birch Lake”, Wallack taps a few trickling keys for the first minute and a half before a cascade of notes enters like wind-swept water, followed by the return of calm to finalize the piece.

In “Josh”, there is the steady repetition of the notes with highs and lows inserted here and there so the listener can identify the ebbs and flows of a person’s life.

The repeating stanzas and soft trailing notes in “Colors”, “Stunning” and “Dreams”, reflect the influence George Winston’s work has had on Wallack’s musical style.

“Brave” begins with a slow and pensive pace but gently accelerates with a determined stride before returning to the slower melody at the finale. Similarly, on “Earth”, Wallack directs the keys to glide along as if airborne just above land. Suddenly I was reminded of a recurring dream of flying, and the feeling of freedom and possibilities before me.

For the concluding “Hope”, “Marlon” and “Midnight”, Wallack presents a fast paced and strong performance which delivers what the first title states - hope.

In this inexplicable state the world finds itself in, it’s important to look for the hopeful and the good. Stephen Wallack decided to capture his recollections and life events from the previous year with this compilation of intimate musical pieces, and dedicated it to his nephew Marlon who suffered brain trauma as a baby. Marlon, who with the help of his mother created the cover art, is an ever-present symbol of what is possible and positive for Wallack, and with this musical effort Wallack has delivered these qualities to us.
~Marilyn Torres for Aural Awakenings