Spotlight: Music That Tells A Story by Symphonex Orchestra 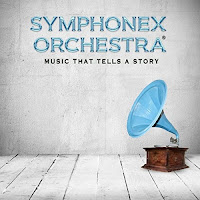 Symphonex Orchestra is a concept project by musician and composer Peter Xifaras, who originally released his debut album, Appassionato, in 2000. Titled Music That Tells A Story, Xifaras’ latest release is a double album comprised of 27 compositions, of which he aptly describes as “a collection of orchestral adventures that have inspired authors to put pen to paper, writing words to the images that this music evokes.” Joined throughout by a handful of guest artists, the classical-centric compositions range from modernly sophisticated with distinct electronica and world flavors to more traditional orchestrations that possess a cinematically sentimental flair.

Opening with a piece from the "Dreams in Bloom" set, this an instrumental collection of six compositions was inspired by a beautiful love story. Additionally, disc two includes introductory narrations by Joan Jacobs to accompany each of their instrumental counterparts. The outstanding first cut in this set, entitled “The Encounter”, is a robust and dramatic foray into cinematic electronica. Featuring a slick beat and bassline accentuated by classical strings, the chic composition is molded in a similar vein to material from Kevin Keller’s La Strada or Prequell’s The Future Comes Before albums.

Another noteworthy piece in the first of five sets is “Garden by the Sea”, which opens with glistening wind chimes. Elegantly cinematic with brushes of piano, viola and bell-tones throughout, the composition’s seemingly East Asian bent aptly brings-to-mind lovely images of a pastel-painted Japanese garden located in a mountainous mist.

"Variations a on Theme of Tromboncino" is derived from the song “Ostinato vo’ seguire” by Bartolomeo Tromboncino, which was originally published circa 1500. Beautifully sung by Felicia Farerre in Italian, this modern rendition masterfully fuses classical renaissance with a contemporary-pop style that reminds me a bit of composer Paul Schwartz’ Aria and State of Grace projects.

And finally, my absolute favorite piece on the album is the gorgeous “Hevene Quene: Edi Beo Thu”, of which perfectly concludes the first disc. A modern adaptation based on an anonymous composition composed in the 13th century, the piece is sung in Middle English and features ethereal vocals that are somewhat reminiscent of Sarah Brightman’s. Enchantingly lush, ethereal and gently rhythmic, the piece incorporates ethnic percussion woven among electronic programming and classical orchestration, while bearing signatures of Celtic, classical and medieval music.

A mesmerizing sound collage of classical, contemporary, global and electronica motifs, I find Peter Xifaras’ production and arranging skills to be highly impressive, as well as his willingness to branch-out and experiment creatively to be most incredibly refreshing! ~Candice Michelle