Spotlight: They Were Here by Byron Metcalf & Jennifer Grais 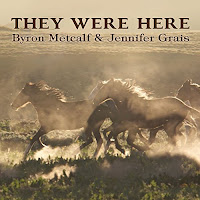 Byron Metcalf is a master world-percussionist whose music I’ve enjoyed immensely for many years. On They Were Here, he teams up with fellow shamanic practitioner and vocalist, Jennifer Grais, with whom Byron first recorded and performed, in collaboration with Steve Roach on his 2004 album Fever Dreams II. Comprised of seven compositions spanning a little over an hour, They Were Here explores the bonds that have long existed between horses and humans – paying musical homage “to the eternal spirit and mystical healing abilities of these treasured (but quickly disappearing) icons”. Like the very nature of these beautiful creatures that inspired it, the album’s musical essence is elegant, mysterious and powerful – as fervent trance-shamanic drumming melds with atmospheric textures and the often-sound of horses running wild. Jennifer’s resounding voice possesses a gothic-tribal quality that's stylistically similar to Lisa Gerrard – with her expressively soulful wordless singing and seemingly extempore ecstatic chanting serving as the perfect complement to these deeply immersive, organic-electronic soundscapes.

The title track, “They Were Here”, unfolds gradually like epic moving images in slow motion. Within just the first two minutes of hearing the piece I can tell that the rest of what lies ahead on this album is going to be phenomenal. Byron lends earthy, polyrhythmic percussion that envelops the listening space, while Jennifer’s invocation-like vocalise feels both transcendent and primal in nature – as if seemingly carried by the wind. Subtle didgeridoo further grounds the listening environment on the one hand, while suspended atmospheric chords effectively lend it an intangible ethereality on the other. “Opening to Freedom” – one of my favorites – considerably revs up the pace with deeply reverberating shamanic drumming, rhythmic shakers and cavernous vocal intonations. “Soul of Mestengo” comes bursting forth with fiery drums that seemingly rise from below into an upwards climb and vibrate throughout every fiber of the listener’s being. Another favorite, “Near & Far Away”, is comparatively slower-paced and guided along by a gentle yet powerful rhythm. Likewise, Jennifer sounds more softly supernal here, as if turning our attention more towards the sky.

“Womb of the Serpent” is perhaps the most darkly dynamic piece on the album. Conveying an ancient, ritualistic essence, its potently encompassing rhythm seemingly echoes throughout a vast chamber, as Jennifer delivers some of her most intensely seraphic and spontaneous ecstatic chant. The aptly-titled “Run” exudes an air of freedom and wild instinct – employing a fast-cycling rhythm that brings-to-mind horses majestically running in open terrain. “Song for Solo” perfectly concludes the album with spacious chords and nocturnal sounds, as softly sparse drums echo like thunder in the distance. Here, Jennifer’s mesmerizing intonations effectively soothe and center, as if one is being gathered into a metaphorical calm within the eye of a passing storm.

A sonic immersion overflowing with passion and power, They Were Here feels sacredly attuned to the earth and rooted in nature’s essence. Destined to be one of this year’s most outstanding releases, this music is made for moving to yet also deeply meditative – and in my experience best played at night. As a side note, I was somewhat reminded of Dead Can Dance’s Spiritchaser album at times – and fans of that musical style, along with Byron Metcalf’s unmistakable signature motifs, will likely be especially pleased with this beautifully magnificent work! ~Candice Michelle

For more information please visit the artist's website. This album can also be purchased at Bandcamp, Amazon and iTunes.