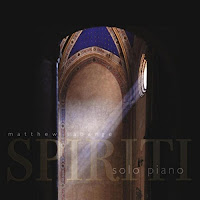 “Spiriti” is a thoughtful opener that gently moves along at a moderate-pace in the mid-range, as Labarge injects bolder touches along the way. “Entrance” ensues with a sustained and flowing pattern that gives the composition an overall glistening, liquid-like effect, and is one of my favorite pieces on the album. Equally compelling is the aptly-named “Each Quiet Sound”, which conveys a sense of comforting solitude. Minor-key and subtle throughout, it’s easy to envision a lone man playing his piano in the kind of spacious and dusky-lit hall so beautifully depicted by the album’s artwork with only a soft ray of light pouring in through the window. Next is “Between the Stars”, a piece that appropriately begins with a twinkling effect in the higher register, until gradually making its way down into the lower register where it seemingly coalescences. Following next is “Children’s Song”, a carefully-paced number that could perhaps be described as a ‘classical lounge’ type of number. “Breeze from the Courtyard Garden” then ensues at a slower pace with stark opening chords that give way to deeply resonating notes throughout.

“Bells and Dwindling Light” begins with slowly repeating bell-like notes in a quietly understated fashion, with additionally solemn chords eventually lending more fullness to the composition. Next, “Six Hundred Year’s” comparatively lightens the mood a bit with its warmer essence of gentle brightness. “Elegy” continues along in this mode, adding fuller and bolder chords that ripple and resonate throughout. Upping the pace up even more, “Kindness” is perhaps the most dramatic and upbeat piece on the album, showcasing a gently galloping quality along its course that eventually comes to a gentle close. Quieting things down is “Weightless Timeless”, a more minimal piece characterized by piano droplets and sparse chords that effectively convey a feeling of suspension and formlessness. And finally, “Love Song” concludes the album with a warmly radiant melody that’s a bit more straightforward and simple.

For more information please visit the artist's website. This album is also available on Amazon, iTunes, CD Baby and Google Play.
at February 23, 2018