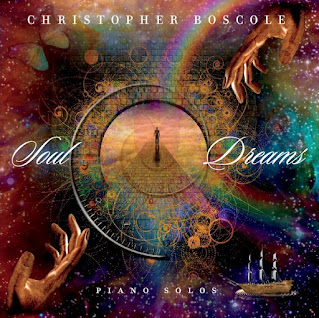 Soul Dreams is the eleventh album by pianist and composer Christopher Boscole. A Pacific Northwest native who currently resides in Hawaii, Christopher draws much of his artistic inspiration from the scenic beauty of his surroundings and sailing around the islands, infusing a colorful atmosphere of warmth, leisure and serenity into his lovely compositions. A formally trained pianist who holds three degrees in music, Christopher cites several notable composers as influences, as is often reflected in his own musical style of which spans the jazz, neoclassical and contemporary instrumental genres. Perfectly depicted by its dreamily beautiful artwork, Soul Dreams, features twelve solo piano compositions that span approximately an hour.

Like finding the elusive end of a rainbow, “New Hope” opens the album on a serenely optimistic note with Christopher’s hands seeming to glide effortlessly across the keys. Played primarily in the higher range with resonating chords in the lower range, the effect can be likened to watching sunlight shimmering upon a body of water gently rippling in the wind. One of my favorite pieces on the album is “Heart Traveler”, which seemingly conveys a contemplative sense of searching for someone or something. Supremely elegant with touches of classical and jazz, the gentle composition mostly hovers in the mid-range as Christopher plays in a graceful, flowing manner. “To See You Again” is another highlight that exudes an air of hopeful longing, as one might perhaps envision the smiling face of a loved one as the sun’s radiant glow shines upon them. The ensuing “Empathy” is a slower-paced and thoughtful piece that recalls a bit of David Nevue, of whom Christopher cites as among his musical influences.

My three absolute favorite compositions on the album are grouped among its latter half, with the first of these being the title track, “Soul Dreams”. Here, spiraling chords in the mid-range remain sustained throughout, as they’re accentuated by tinkling notes in the higher register. A dreamy, almost cosmic-sounding piece, it seemingly alludes to the spiral shapes found throughout nature, of which includes everything from seashells to the Milky Way Galaxy. Similarly in this mode is the cleverly-named “Mistery”, which effectively recalls Michael Jones (who is another one of Christopher’s influences) and in particular, his Seascapes album that was released on Narada Records in the mid-80’s. Essentially an improvisational, unbounded soundscape, the piece is characterized by continuously cascading and sparkling chords that seemingly mimic a light rain-shower in the wind, as sunlight softly peers through grey skies. Christopher once again slips into this mode on the closing piece, “Suite Sunshine”, which exudes a supernal warmth and overall sense of divine love expressed through nature’s beauty.

Conveying a reflective mood and tender romance wrapped in a wondrous awe of the natural world around us, Soul Dreams is at once expressive and colorful yet serene and introspective. Equally on par with Christopher Boscole’s previous album, Skipping on Daisies, fans especially of David Nevue, Michael Jones and Peter Kater are highly encouraged to check out this outstanding follow-up! ~Candice Michelle

For more information please visit the artist's website. This album is also available at Amazon, iTunes, and more.