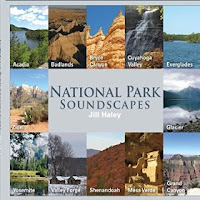 National Park Soundscapes is the fourth in a series of albums inspired by national parks of the United States from Jill Haley, an award-winning composer, pianist, oboist and English horn player. Comprised of twelve compositions spanning fifty minutes, she is joined throughout by David Cullen on guitar and bass, Tony Deangelis on percussion and snare drum, Dana Cullen on horn, and Graham Cullen on cello. An accompanying photographical booklet details the various landmarks across the country, from which each composition’s theme and title draws its inspiration.

Located in Ohio’s Cuyahoga Valley National Park, “The Ledges” is named for its ancient sandstone formations inside a hemlock forest. This leisurely piece opens up slowly with gentle piano, followed by English horn and subtle percussive elements. Possessing a soothing, solemn sound, Jill’s horn is subtly contrasted by the fluidity and lightness of her piano. The more uplifting “Prairie Grass Dance” follows next, a piece named for South Dakota’s Badlands National Park. Characterized by acoustic guitar and horn, the piece moves along at a rhythmic pace while exuding a distinctly Americana feel, as the guitar-strumming and upbeat melody captures the exuberant warmth of a sunny day. My favorite composition is “Waters of Acadia”, which is named for Maine’s glorious Acadia National Park. This piece begins with the gentle sound of a rainstick followed by softly cascading piano and glistening chimes, which collectively mimic the flow of water. A stunning piece that captures the enchanting array of colors characteristic of Northeastern terrain, extended horn notes and a repeating piano riff throughout lend themselves to the composition’s rejuvenating, tranquil atmosphere. Located in Virginia is Shenandoah National Park, for which “Shenandoah Stillness” is named. This notably earthy piece opens with a bold piano melody that resonates richly throughout, as interwoven acoustic guitar provides an added dimensional layer to the composition. Named for the giant redwood trees of Mariposa Grove that are located in California’s famous Yosemite National Park, “Mariposa Sanctuary” captures its picturesque beauty. A lilting piano melody opens this piece, which is eventually joined by horn and oboe, as one can easily imagine taking a stroll through the park’s mountainous and thickly-forested terrain. “Waves of Wind” is another notable piece that deviates slightly from the other compositions. Inspired by Utah’s Bryce Canyon National Park, piano and oboe are set to a waltzing rhythm, as cello and twangy guitar add a drier element to the composition. Moving along at a galloping pace, this piece brings to mind that of horseback riding along rugged terrain, as its musical elements perfectly capture the region’s arid climate. Closing out the album on a somewhat somber note is “A Soldier’s Sacrifice”, a piece inspired by Pennsylvania’s Valley Forge Historical Park. Led by the marching pace of a snare drum along with sparse piano and English horn, the composition’s distinctly patriotic tone makes for a most fitting conclusion.

Perfectly capturing the essence of some of the most awe-inspiring and breathtaking American landscapes, National Park Soundscapes plays out like a cross-country musical road map. Being especially fond of geography, as well as possessing a love of travel, the brief overviews given for each of the compositions were also a welcome educational experience, as I found myself researching, especially, the locations and history a few of the lesser-known national parks. Bordering on new age, contemporary instrumental and Americana music with classical overtones, the stellar compositions on this album felt overall grounding, connected to Earth and organic in nature, serving as a reminder with every walk, step and turn of just how much natural beauty and wonder exists throughout the United States! ~Candice Michelle

This album is available at Amazon, iTunes and CD Baby.