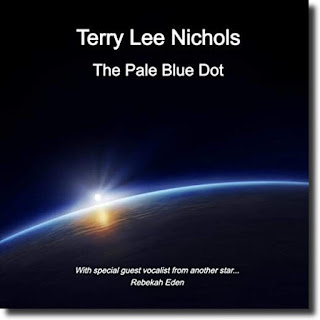 Standing firmly on both his solid music as well as his technology education, Terry Lee Nichols explores the many-faceted angles of our universe and human existence through his latest album The Pale Blue Dot. While it may seem like a daunting task, Nichols embraces the vast and endless galactic realm together with the minute and delicate human connection, through his compositions.

The opening track “In the Beginning… (Quantum Fluctuations)” starts with soft, chant-like suspiration that fades into presenting strings. The pitch rises and then softly descends as the piano enters and continues the journey accompanied by the harp and flute. The feeling of dawn and layered awareness, sustain the piece as it ends on a climbing piano note.

Moving forward from our expectant introduction, the second piece, “Cosmic Dark Ages” filled me with a sense of calm as I envisioned stark space with no demands of form and function; just a waiting period. Nevertheless, on the following track “First Stars” we witness the birth of the illuminating spheres, first with twinkling piano keys from the six pianos commissioned for this piece, overlapping faster and faster, and then yielding to the thundering entrance of the drums and French horns. These in turn, yield to the returning twinkling piano keys and suddenly a vibrant Latin mix fills the scene with life and energy, which made me want to salsa for a moment, before yielding for one last time to the twinkling keys. What fun!

On “Stardust (Clouds of Gas and Dust)”, there is a steady determined beat as of moving parts, with the piano, and then we hear the vocals by Rebekah Eden mid-way and at the culmination, giving the piece a softness to contrast the working pace.

In “Asteroids” Nichols gives a nod to his classical music training by including the introductory "Piano Concerto #23" by Wolfgang Amadeus Mozart. The piece gives way to an electronic beat and together the two circle back and forth until the climactic lift-off and fade, which makes way for the end of "Moonlight Sonata" by Beethoven.

The overall sense of growth and change continues with “The Cambria Explosion”, and in “East of Eden” we are treated once more to Rebekah Eden’s lush and soothing vocals. Nichols displays his conviction of how music can enhance all aspects of development through the expressive tone of “Child’s Play”.

“Memories of Love” with its dedicated transitions forms an image of all the pieces in the timeline of a life filled with highs and lows. The familiar, steady strike of the piano keys repeats throughout and on into the conclusion of “Global Warming” as if to bring home a crucial directive.

For the final and main title track, “Pale Blue Dot (Train to Dachau)”, Nichols introduces the strong sound of a train whistling as it barrels down its track and fades into the gentle strings. After a reflective piano solo, the piece plays some of the “Greetings from Planet Earth” included in the Voyager space mission and then we hear Carl Sagan recite the namesake speech; a quite fitting close to an ambitious and soul-soothing musical journey.

For more information please visit the artist's website. The Pale Blue Dot is also available at Amazon, iTunes and more!
at June 14, 2021