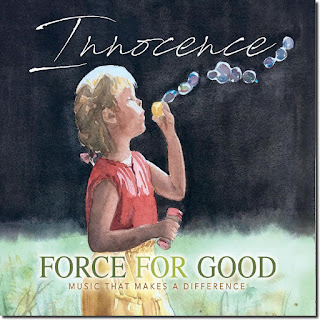 Joyfully guiding us into the blossoming spring season is the second album by Force for Good, which comes on the heels of the musical project’s debut 2020 release Passions. Produced by Jonathan Sprout and Joe Mennonna – the latter of whom contributes all keyboard, woodwind and brass instrument performances as well as MIDI programming – Innocence features fourteen instrumental compositions that range from calm and gentle to festive and lively.

Having performed professionally since the early 1970s, Jonathan Sprout has played thousands of concerts, with the bulk of those being performances for children. Additionally, his 2009 album, American Heroes #3, earned him a Grammy Award nomination in the category of Best Musical Album for Children.

Other highlights include the opening track “Natural” with its Americana flavors and steadily galloping groove – as well as the more neoclassical “Wilderness”, which showcases delicate harp and flute figures amid tip-toeing swells of silky symphony and impassioned piano preludes.

Conjuring images of a bright blue day and dolphins swimming in the sea, “Oceans” impressively stands-out from the view with its unexpected divergence into a Celtic-laced interplay of celebratory instrumentation that peaks at about midway with a pulsating percussive hook.

Relaying a message of care for humanity and environmental stewardship, Innocence offers an hour of mood-elevating optimism that encourages us to reconnect with our inner child. ~Candice Michelle